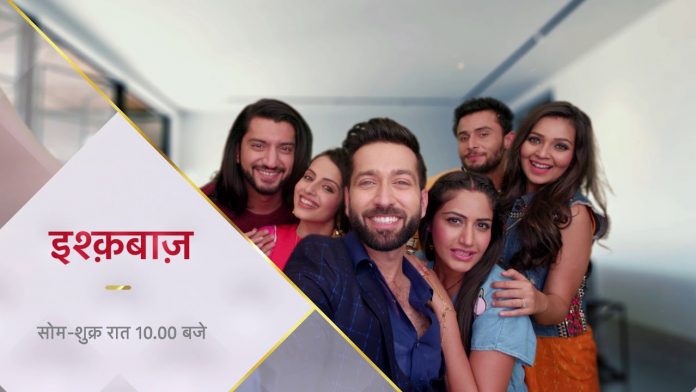 Obahus welcome Fiza. Farhan and Fiza bring excitement in the family. Shivay tells them that Anika talks non-stop. He warns Farhan to be prepared to answer Anika’s questions. Anika asks Farhan about Fiza. Farhan tells her that he believes in living in limits, and his wife is okay with his rules. Shivay asks Anika to take the guests to their room. Shivay and Omkara observe Farhan’s strange behavior. They don’t know the issues between Farhan and Fiza. Shivay is sure that they can help in increasing their understanding. Anika shows the room to Fiza and asks her to freshen up, so that they can get talking. She finds Fiza too silent and asks her to tell her if there is any issue. She reveals about Shivay’s arrangements for Eid. Fiza tells her that just this Eid is the memorable one for her. Before they could talk out, Farhan interrupts them. He doesn’t let Anika know anything about their marriage. Anika senses something is wrong between them.

Shivay tells Gauri to make sure that everything is right. He wants the arrangements to be perfect. Farhan asks Shivay to answer Anika’s phone in her absence. Shivay tells him that he trusts Anika and doesn’t need to check her phone, there should be privacy between them. Omkara and Rudra agree with Shivay and ask Farhan to respect privacy of his partner. Farhan tells them that they should show their phone if there is nothing to hide. He tells them that he checks Fiza’s phone, but Fiza doesn’t need to check his phone. Shivay doesn’t agree with his perception. They have an argument. Farhan tells him that women shouldn’t get such liberty at home. Shivay asks Farhan what happened to him and his thinking, why did he change so much that he is compelling others to follow his thinking. Anika asks them to have their own perceptions and talk good things to celebrate their meet.

Rudra shows his marriage album to Farhan. Obahus bond with Fiza. Anika tries to know her problem. Fiza stays reserved. She refuses to accompany Anika for shopping. Farhan limits Anika and asks her not to take Fiza out, he has got everything for Fiza. Anika wants Fiza to help them in dress selection. Farhan stays upset with Fiza. Anika gets sure of the problems between them. Shivay tells Anika that he didn’t expect such change in Farhan. Fiza doesn’t know why Farhan doubts on her so much.

She tells him that she didn’t wish to go with Anika. She asks him why did he lose faith in her. Farhan doesn’t talk to her well. Shivay finds Fiza crying and asks her to share the problem. He doesn’t want her to pretend happiness. He tells her that he will try his best to bring harmony in their relation.

She tells him that Farhan spies on her and doubts on her character, when he knows that she loves him a lot. She tells Shivay that she failed to win Farhan’s trust and this has happened recently by unknown reasons. She feels her marriage is breaking. Shivay tells her that he will clear the problems. He knows Farhan is clean-hearted. He asks her to try to lessen the distances. She thanks him for help.

He blesses her and regards her like his sister. Fiza slips and takes support from Shivay. Shivay gets helpless to hold her in arms to balance her. Farhan and everyone find them in an odd situation. Farhan reacts angrily on Fiza. Shivay explains to Farhan that its nothing as it appears. Farhan calls Fiza characterless. He blames her for having affairs in his absence. He tells them how Fiza has always shocked him by her wandering ways. He doesn’t blame Shivay. He tells Shivay that Fiza is eyeing him now. Fiza tells Farhan that she was just balancing herself by Shivay’s support.

The drama gets high when Fiza sheds tears and melts Shivay’s heart. Shivay takes a stand for her as he knows the situation well. Farhan reprimands Fiza for getting him humiliated this way by eyeing his friend. Fiza tells Farhan that she just loves him. Farhan doesn’t believe her. He decides to break ties with her. Shivay doesn’t understand why things are going out of hands. Farhan declares his decision to divorce Fiza. Shivay can’t see this happening. He clarifies his part to Anika and asks her to help him in clearing the differences between Farhan and Fiza.