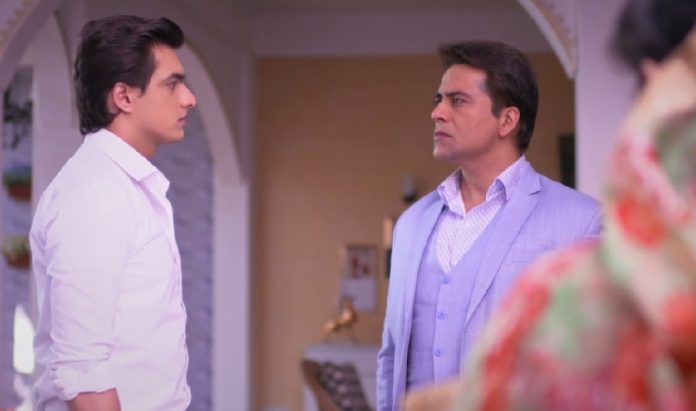 Kartik confronts Naira for insulting by her speech against her husband. He vents out anger on Naira. He asks her why did she not tell them his name. She doesn’t answer him. He tells her that she has to answer him, she can’t run away. She tells him that she will answer the one she wants, she won’t just obey him. He scolds her for acting helpless and gaining everyone’s sympathy. She makes it clear that she follows her heart. She yells at him for venting his anger out. She asks him does he really hate her. She asks him to do anything, as he has oust her from the house already. They then realize that they are in the family. Naira gets glad when Tanvi and everyone support her. Naira tells her that marriage doesn’t change anything in life. Dean requests the chief guest Suhasini Goenka to come on the stage. Kartik and Naira get a huge shock on seeing her.

Dadi crowns the winners of the freshers party. Dadi too gets a shock on finding Naira in the same college. Dean praises Naira for pursuing education after marriage. Dadi crowns Naira and hugs her. Kartik and Naira have a moment. Manish learns about the college function invite. He gets a huge shock knowing Dadi has joined the college as the new trustee to live with Kartik. Lav and Kush tell him that Dadi is with Kartik in Mumbai. Manish hides the matter from Suwarna. Suwarna tells him that she had gone for some social work. Dadi meets Kartik and cries having a compassionate hug.

Naitik meets Naira at the college and reveals that he is well aware of Kartik’s presence. He asks Naira why did she hide the matter and tolerated everything again. Kartik tells Dadi that he has taken the flat in the same building where Naira lives, since Suwarna has chosen that flat for him. Dadi understands that its tough for Kartik and Naira to stay in front of each other. Kartik tells her that everything happened coincidentally, he didn’t mean to return in Naira’s life, its all fate.

Naitik tells Naira that they will leave the city. Naira tells him that she won’t get affected by Kartik, as she can’t run away to show that she was wrong in Shubham’s matter. She decides to stay back and continue her studies. Kartik tells Dadi that he will be working in the college, he doesn’t want to get affected. Dadi informs Manish that she is with Kartik, but destiny brought Naira to him. He asks her to help Kartik and Naira unite, they have true love and that’s why destiny is bringing them together. He asks Dadi to just support Naira as its for Kartik’s happiness. Dadi stays confused after overhearing Kartik and Naira’s verbal spat.