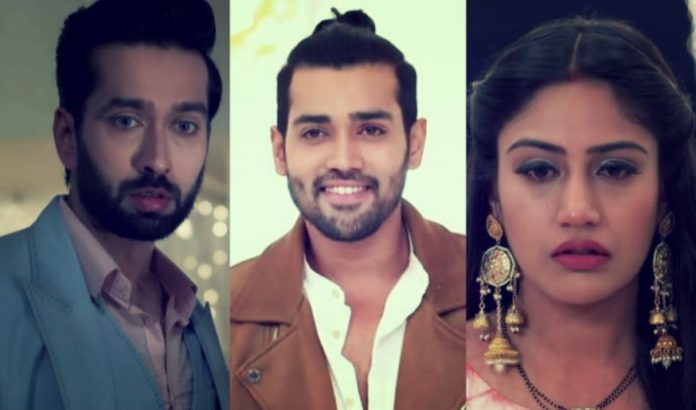 Priyanka gets unwell after choking. She has the same heart weakness like Shivay. Anika reaches Priyanka on time and saves her life once again. Shivay gets a huge shock on finding Priyanka unconscious. He calls the doctor for Priyanka’s treatment. The doctor tells her that Priyanka got saved on time, else choking could have been dangerous. Priyanka tells Shivay that Anika is like an angel for her, who makes her feel safe and secure. He worries for Priyanka. He asks her to take rest. Priyanka tells him that Anika saved her life once again and now she won’t let Anika leave. He agrees to stop Anika from leaving for Priyanka’s sake. Gauri asks Anika why are they leaving so soon. Anika tells her that they lost the roof and now they have to make the move.

Shivay tells Dadi that Anika can tell Priyanka about Daksh and ruin her happiness. Dadi asks him to stop Anika and know the real matter, both Daksh and Anika can’t be wrong. He thinks if Anika is lying. Dadi tells him that no girl will defame herself by saying such wrong things. She asks Shivay to rush to Anika and make her stay back. Shivay meets Anika and orders her to stay back and work as Priyanka’s wedding planner. He warns her against spoiling Priyanka’s marriage and happiness. He tells her that she shouldn’t tell anything about Daksh to Priyanka. He directly warns her about the dire consequences. Anika agrees to stay back for Priyanka’s sake. She tells him that she really cares for Priyanka and he will know it soon as well. Anika gets a gift from Shivay. She checks the costly phone and returns it to Shivay. She tells him that she is rich as she has her self-esteem.

He questions her about lying and misleading them about Daksh. He asks her if she has self-esteem for real. He taunts her for stooping low for money. Anika tells him that she didn’t lie about Daksh, the incident really occurred with her and she has no reason to lie about Daksh. She tells him that she spoke up just for Priyanka’s sake. Her tears and sorrow touches his heart. Shivay gets busy in work. He happens to watch Anika’s daily struggles while she works at the food stall in morning, along with managing Priyanka’s wedding arrangements. Anika gets hurt and still stays strong. She doesn’t care for her wound and carries out her duties. Shivay gets impressed with her. He meets Priyanka and asks her about Anika. Priyanka makes the guest list. She tells him that Anika has gone to the food stall for her work. He asks her to call Anika back and assign her all the work.

She tells him that some rude man has broken Anika’s phone at the hospital. He defends himself and tells her that maybe it was Anika’s mistake. She asks him why is he defending that man and judging Anika. She pulls his leg. He asks her to give a phone to Anika if she can’t afford it herself. He hides his planning and hands over the phone. Priyanka gets surprised by his gesture for Anika. Priyanka gives the phone to Anika.

Anika doesn’t accept it again. Priyanka tells Anika that she can keep it as phone is necessary for work coordination. Anika thanks Priyanka and accepts it. Shivay gets happy that Anika accepted his gift. He watches her working. He wants Anika to use the phone. He asks her to answer her ringing phone. Priyanka calls up Daksh, while he is busy with Payal. Daksh makes false promises to Payal. Anika finds Priyanka worried for Daksh. She wishes Daksh isn’t wrong. She meets Payal to know about her lie. Daksh hides from Anika.

Payal refuses to talk to Anika. Anika wants to make sure that Priyanka stays happy. She tells Priyanka that she is really concerned for her. She really likes Priyanka and her humble behavior. She blesses Priyanka. Shivay gets emotional watching them. He thinks Anika is really good-hearted and there is more to know about Daksh. Anika gets terrified when Daksh meets her and exhibits his cheap intentions. Daksh tells her that he didn’t come to meet Priyanka and wants to get open about his feelings. He gets flirting and tells Anika that it was really him at Payal’s house. Anika gets scared of him.

Daksh tells her that he doesn’t want to play hide and seek with her. He tells her that he will begin the real game now. Daksh throws a challenge for her and is sure that she can never expose him. He asks her to seek help from anyone. Anika gets worried after his threatening. Shivay finds her in a panicky state and asks the reason. Anika doesn’t reveal anything to him, which makes him curious to know the truth. Shivay determines to find the truth and end Anika’s doubts about Daksh. He gives her a chance to prove Daksh wrong, while he will try to prove Daksh right. Anika comes up with a plan. Shivay joins her.