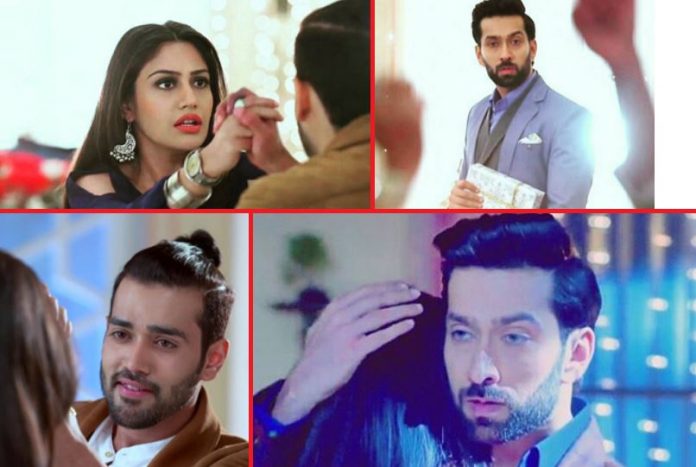 Shivay stops Anika back and asks her to try the ring, so that he can check it and explore more options. Anika doesn’t want to wear it, as her hand has swelling. She tells him that she isn’t able to wear the ring. He asks her to wear it the right way. He makes Anika wear the ring. The moment stops for them. They have an extended eyelock. Shivay doesn’t feel like leaving her hand. He gets mesmerized seeing her. He calls her extraordinarily beautiful. He gets lost in his eyes. Anika asks Shivay what is he doing. He tells her that he is praising the ring, it will suit Tia a lot. He gets happy that the ring won’t get off her hand. He hides his intentions and wants to cancel her engagement with Nikhil. He acts desperate for a moment. Anika tries to remove the ring. She fails to do so.

Gauri reminds Anika that Nikhil is arriving. Anika tries her best to remove the ring. She gets more hurt. Shivay informs Dadi that the engagement ring got stuck in Anika’s finger. Omkara and Rudra find it funny that Shivay and Anika fulfill the wedding rituals unknowingly.

Shivay tells them that he asked the jeweller to get similar ring for Tia. His brothers don’t think Shivay is serious. Dadi asks Shivay how will his engagement happen without the ring. She asks him to arrange a ring for Tia soon.

Anika meets Nikhil in their engagement ceremony. The family gets a shock on finding a costly ring in her finger. Nikhil questions her about the ring gifted by Shivay. Obros tell Tia and her family about the lost ring. Tia learns that Anika was trying the engagement ring, which got stuck in her finger. Tia’s mum objects to this. Rudra suggests them to use any old ring for engagement. Dadi doesn’t know why Shivay made Anika try Tia’s ring. Rudra tells Dadi that they will miss the mahurat if they wait for the ring. They decide to go ahead and use some old ring, instead cancelling the engagement.

Anika tells Nikhil that she tried much, but she didn’t succeed to remove the ring. Gauri asks her to wear it in other hand. Nikhil tells Anika that their engagement is important, ring or rituals doesn’t matter. Anika and Nikhil get engaged, with a twist, just like Shivay and Tia exchange the old rings. Shivay and Anika think of their accidental engagement moment. Rudra tells Omkara that there is more than what meets their eyes, maybe Anika is destined for Shivay.

Shivay meets Anika to ask about her engagement. She tells him that she couldn’t remove the ring, she had to wear her engagement ring in other hand. He tells her that she can remove the ring by taking jeweller’s help. Shivay gets angry on the person when Anika gets hurt while removing the ring. Shivay asks the man to get lost. He feels sorry to trouble Anika and compel her to make sweets, which got her hands swollen. He gets caring for her and nearly falls for her. Shivay and Anika have a moment, and get interrupted by Daksh. Daksh gets upset seeing them romancing. He tells Shivay that Anika shouldn’t come in between Shivay and Tia. He asks Anika to return Tia’s ring, as he can’t bear anyone having Tia’s belonging. Anika gets hurt in an attempt to remove it.

Shivay asks Anika to return it later. Daksh asks Shivay to maintain some distance with Anika. He asks Shivay if Anika will return the ring, as Anika may keep that expensive ring for her greed.

Shivay tells Daksh that Anika isn’t greedy. Daksh asks Shivay how does he know Anika well. He gets revengeful against Anika. He thinks to defame Anika by linking her up with Shivay. Priyanka asks Daksh not to tease Shivay about Anika. Shivay doesn’t think seriously about Daksh’s taunts. Daksh understands that there is something between Shivay and Anika. He conspires to get them caught in front of everyone, so that he can settle scores with Anika.

Anika meets Shivay and tells him that she wants to talk to him. He asks her not to talk about Daksh again. He asks her to return the ring, which she finally does. He feels hurt that she got freed from his bond. Omkara and Rudra get curious to know their bonding. They guess that Shivay is hiding his feelings, just like Anika. They observe Shivay’s odd behavior and find something fishy. Rudra tells Omkara that there is something happening right in front of them, but they are unable to understand it, so they should ask Shivay directly. Omkara tells Rudra that Shivay will never open up his feelings. Omkara and Rudra make plans to know Shivay’s feelings for Anika.