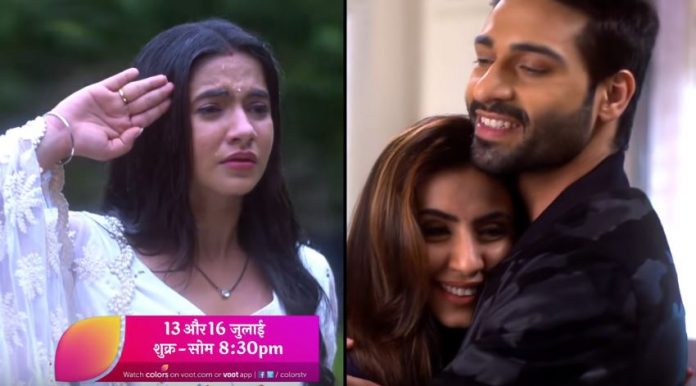 Suraj and Naina enjoy in Geeta’s party. Naina likes Suraj and sees a life partner in him. Suraj tries to end all her fears. They have a dance performance in the party. Suraj tells everyone that Naina is a great dancer. Everyone compliments Naina for her dancing skills. Naina’s friends thank Suraj for making them Naina’s new side. Naina learns that her dad has arrived in the party. She tries to hide Suraj. She asks Geeta not to let her dad see Suraj. Geeta helps Suraj rush away before Colonel reaches.

Naina feels sorry to lie to her dad. She doesn’t want Colonel to meet Suraj this way, as Colonel will get a wrong impression of Suraj. Naina’s genuine goodness makes Suraj like her. Colonel learns about Suraj.

He reacts calm and invites Suraj home for a talk. Naina gets worried and thinks to save Suraj from Colonel’s anger. Chakor and Vivaan take disguise and enter the party venue to protect Suraj. They don’t want Suraj to get caught or punished by Colonel. Suraj meets Chakor and assures her that he will take care of himself. He gets prepared to answer Colonel and win his trust, so that he can reach the safe and get the important documents to stop Colonel’s dangerous planning. Colonel fixes Suraj and Naina’s marriage, just for the sake of Naina’s happiness. He tests Suraj for knowing his loyalty. Naina gets happy when Suraj passes the test.