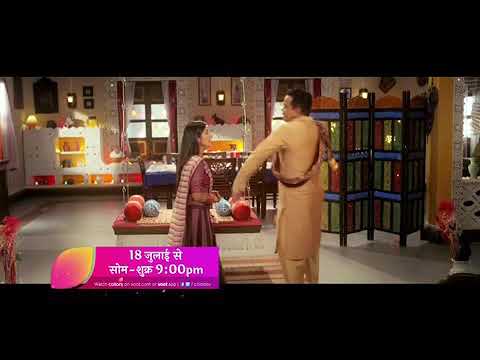 Kamla decides to leave the house being afraid of Shamsher’s decisions for her children. Shamsher gets Roop admitted in a boarding school and hopes his decision to separate him from his mother and sisters turn fruitful. He returns home and sees Kamla leaving the house. He stops them and asks Kamla to go with her daughters if she wants, but she can’t take Roop with her. Kamla is forced to stay back due to Roop. Shamsher tells everyone about his decision to send Roop far away from them to change his thinking. Kamla tries to change his decision, but he is adamant and asks her not to interfere. The show heads for a 12 years leap.

After the leap, Himani and Jigna are shown married. While the younger one Kinjal will be seen as a support system to Kamla. She will protect her mum from Bua’s taunts. The show will focus on grown-up Roop who is still the same and have the same values which Kamla taught him. He respects woman and saves a female lead from the goon who misbehaves with him. He teaches the goon to respect the woman. He wants to change society’s thinking. Shamsher and Kamla wait for Roop’s return. The grown-up Roop will be played by Shashank Vyas and Donal Bisht will play Palak’s role.

Roop returns home. His clash with Shamsher begins. Shamsher wants him to enrol in military science. Roop wants to study hotel management. He gets the form from Shamsher and tears it. He doesn’t care for Shamsher and rebels. He keeps his viewpoint in front of his dad after 15 years. Shamsher shouts on Roop for disrespecting him. Roop will put up such questions for the society for the women empowerment and rights. Roop will portray the ideal man.