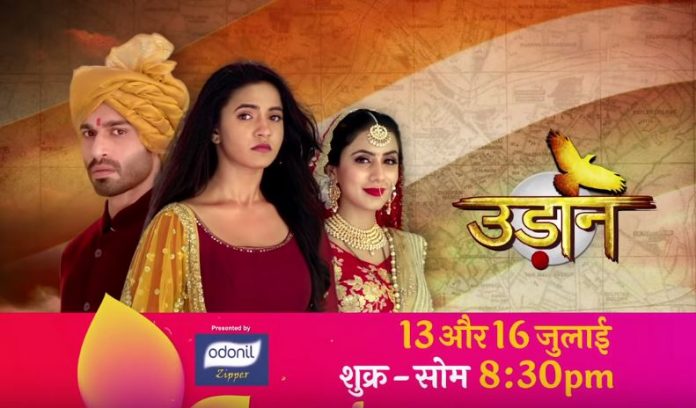 Udaan: Suraj shoots at Chakor in the market and passes Colonel’s test. Suraj didn’t know that Chakor has come to support him. He regrets that Chakor came on his insistence. He wishes Chakor to get saved. Colonel praises Suraj for not thinking for a second and shooting a stranger. Colonel shows his house to Suraj. Suraj asks where is Naina. Colonel says she will come, Naina has decorated this house. Suraj says its really beautiful. Chakor secretly enters Colonel’s house. She spies on Colonel, while Suraj meets him. Chakor gets caught by the guards. She makes excuses and manages to escape. Suraj finds Chakor hiding and asks her why did she take big risk to enter the house. Chakor doesn’t waste time and checks the files to know Colonel’s plans. Chakor hears Colonel’s plan to get Suraj and Naina married. She worries on knowing this.

Colonel asks Suraj to give him a reply, if Suraj really wants to wed Naina and keep his love vow. Suraj gets speechless. Naina asks Suraj why is he in a dilemma. Suraj doesn’t understand what to say. Colonel wants the marriage to happen within a week. Suraj thinks he will be trapped if he gets married to Naina. He wants to avoid the marriage. He wishes he finishes his task soon. Colonel finds Suraj brave and protective about Naina. He wants Suraj to marry Naina at the earliest. Suraj regrets to pass Colonel’s test. He didn’t know Colonel will directly talk about the marriage. Chakor asks Suraj to do anything for their mission, as they have to save the nation first.

Silsila:
Kunal and Mauli have an argument over Nandini’s stay. Kunal explains her that Nandini should move on. Mauli doesn’t listen. Kunal gets a saree for Mauli, which she gives it to Nandini. He gets upset. She later realizes her mistake and apologizes to him, by doing sit ups. Kunal hugs her and gets rid of his anger. He is frustrated that he is liking Nandini. He doesn’t know why is he getting attracted to her, when he loves Mauli so much. He doesn’t realize his feelings.

Nandini leaves Kunal and Mauli’s house. Mauli gets upset with her leaving. Nandini assures that she will stay strong and not get affected by anything in life again. Mauli finds hard to withdraw her support. Nandini asks Mauli to let her go, and not stop her, since she will keep coming to bother her again. Mauli hugs Nandini and cries. Mauli asks Nandini to go with Kunal to operate the bank locker. Nandini refuses. Mauli insists Nandini and Kunal to go. Kunal agrees for Mauli’s sake. Nandini meets everyone before leaving. She bonds with the entire family. Kunal witnesses this. Everyone gets sad, since they got attached with Nandini a lot. Mauli makes Nandini promise that she will stay in touch. Nandini wants to become independent.