Saam Daam Dand Bhed:
Bulbul and Vijay express their love for each other. They have a sweet moment. Bulbul hugs Vijay. She tells him that she has learnt the truth, how he was blackmailed by Mandira for marriage. Bulbul saves him when his plan was failing in front of Mandira. Vijay thanks her. Mandira tries to find out Vijay’s drama. Mandira reaches them and breaks their romance.

Kaleerein:
Meera and Vivaan have separated their ways. Vivaan hates Meera. He holds her responsible for Pammi’s death and Amaya’s coma state. Meera takes the spiritual Bhabhuti power to apply to Amaya’s forehead. Vivaan stops Meera from her fake care drama. He makes the powder fall. He pushes Meera, while the powder gets on Amaya’s forehead by wind. He makes Meera out of the room and shuts door. Vivaan tries to sleep and stays disturbed. Meera sees him and sings a lullaby to comfort his tensions. Vivaan listens to her and sleeps. He stays in her anger zone.

Dil Hi Toh Hai:
Reva tells Ananya that she had talked to Rithvik’s driver and he told her that he is in Palak’s house. Ananya gets upset. Reva says he should have told you. Palak feels going close to Rithvik and thinks she shall listen to heart or mind. She thinks this is not right though.

Tabassum compels Muskaan and Aarti to accept her conditions if they want to stay safe. She threatens of punishing them for each other’s rebellious mistakes. Aarti gives up the battle for protecting Muskaan from Tabassum’s heartless doings. She agrees to leave the house and go to any other place selected by Tabassum. Muskaan begs Tabassum to stop Aarti back. Aarti gets forced to leave and cries for her daughter. Muskaan tells Tabassum that she wants to meet Aarti. Tabassum asks her to obey all her orders well, if she wants her basic needs to be fulfulled. She controls Muskaan and takes away all her favorite toys. Muskaan gets disheartened. Her childhood gets ruined.

Parmeet informs Simmi that Raghav is threatening him. Raghav calls up Parmeet. He asks Parmeet for money so that he can save himself from police. He gets scared that he will get caught. He tells Parmeet that he will expose him in front of the family if his demands aren’t fulfilled. Parmeet lies to Raghav that he isn’t at home. Raghav knows Parmeet is lying and goes to check for him at Bhalla house, where Roshni confronts him. He attacks Roshni and tries to escape. Roshni gets beaten up, even when she tries to defend the attacks. Her child’s life falls in danger. Roshni is found injured by the hospital.

Kundali Bhagya:
Karan, Rishabh and Preeta chase the car in which Sanju is taking Prithvi after the kidnapping drama. Karan gets doubtful and shares with Preeta that Prithvi is going smoothly with Sanju without struggling to stop the car. Preeta gets doubtful too. Prithvi tries to fool them again.

Bitti Business Wali:
Bitti and Gayatri go to Laddo Singh house to apologize to Mahi and Laddo Singh after Dadi insulted them badly. Prema tells them that they went to her house only. Meanwhile, Mahi feels much humiliated and decides to forget Bitti and marry the girl of his father’s choice. He tells Laddo Singh that he had enough now and will marry today itself. Ladoo Singh and Kashi are shocked.

Kulfi goes with the stranger and lands in his home. She stays happy thinking he is her father. She sings a song with David. He fails to sing along, which makes her doubt him. She goes to some room, which makes him scold her. She gets scared seeing his anger. She thinks David isn’t her father. She gets cornered in the house and cries thinking of Sikandar and family, who gave her much love selflessly. Kulfi wishes Sikandar rescues her.

Dadi meets Singhanias to talk about her stand on Anmol and Mansi’s relationship. She makes a mind to reject the alliance. Kartik accompanies Dadi. Anmol and Mansi call up Naira to meet them urgently. Naira reaches them and asks the matter. Naira gets a shock by knowing Mansi’s pregnancy truth. Mansi and Anmol apologize for their blunder and request Naira to convince Dadi for the alliance. Naira thinks to talk to Kartik, since she has a big news to break. She reveals to him about Mansi’s pregnancy. Kartik gets a big shock. Kartik and Naira scold Mansi and Anmol for their mistake. Mansi pleads to them to save her relationship. Anmol promises Kartik of keeping Mansi happy always. 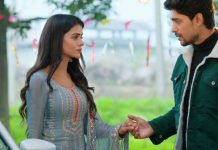 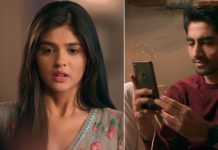 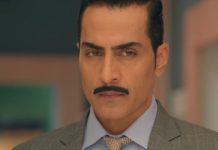