Krishna Chali London:
Krishna and Prashant’s friendship makes Radhe jealous. Saajan and Radhe see Krishna with Prashant. Prashant hugs Krishna and consoles her. Radhe gets upset. Saajan asks Radhe to keep Krishna away from Prashant. Dubey thanks Prashant for bailing him out. Bua takes Krishna with him, when she sees Prashant is trying to enter their lives again. Dubey doesn’t talk to Radhe, after Shukla’s bad doing. Krishna is grateful to Prashant for helping her in the needful time. She asks Prashant how did he come back suddenly. Prashant tells her that he will answer everything, once they take Dubey home. Radhe wonders how is Prashant related to Krisha. He doesn’t know Krishna’s past. Krishna then learns that Radhe has got beaten up to get money. She hugs him and values his efforts. Radhe succeeds in getting money. He believes that Krishna is just of him.

Suyash and Vidhaan hide the little girl from the family. The girl brings happiness in their lives, but also some tension. Suyash wants to know whose daughter is she, so that she can get her parents. Vidhaan denies to know her when she calls him dad. Suyash takes Falguni away, while Vidhaan hides the girl from them. Pari calls them Papa and cries. Suyash says I m not your dad. She signs towards Vidhaan.

Roop:
Shamsher visits the garage to get his police jeep repaired. He isn’t aware that Roop works in the garage. He gets surprised seeing Roop working as the mechanic. He questions Roop about his work. Roop repairs his jeep. His hand gets burnt. Shamsher doesn’t care for him. Roop takes the money from him and returns the change. Shamsher dislikes this and leaves from the garage.

Aapke Aa Jane Se:
Sahil gets drunk. Bhoomi throws away the wine bottle. Sahil is heartbroken. He creates a drama on the road. Bhoomi suggests that he should dance and get relieved of stress. She dances with Sahil. They are following Yash and Vedika. Sahil doesn’t want to cry for Vedika. He instead vents out his sorrow by drunken dancing. She supports him to make him feel better and forget the tension. She doesn’t want Sahil to hurt himself.

Kulfi gets kidnapped by David. She falls in big danger when David threatens to hurt her. Sikandar is finding her everywhere. He reaches the place, suspecting David has hidden Kulfi there. He learns that David isn’t mentally fine. He worries that David can hurt Kulfi. Sikandar spies on the house to see Kulfi once. David tortures Kulfi. She falls helpless. She wants to go back to Sikandar. Sikandar checks David’s house. He gets police there. He doesn’t find David and Kulfi. He gets clues and senses that Kulfi was there in the house. He misses Kulfi. He thinks he will get Kulfi at the same house. Sikandar stays outside the house for one night. David finds Sikandar sleeping and hides Kulfi to take her away.

Kabeer and Miraj have a big confrontation, when Kabeer finds Miraj misbehaving with Zara. Miraj tells Zara that he will give her money and financial security which Kabeer can’t give her. Miraj tells her that he can give any amount to get her. Zara slaps him. Miraj doesn’t let her go. Kabeer gets angry and tells Miraj that he doesn’t deserve to stay in any decent family. He scolds Miraj for crossing his limits. He tells Miraj that Zara isn’t alone, he will always be with her to protect her. Kabeer beats up Miraj.

Rajdeep defames Nandini. Nandini faces humiliation by the society members, who expel her from the building. Kunal comes to Nandini’s rescue. He holds her when the people throw her out. Kunal defends Nandini and lectures the people in favor of Nandini’s dignity. He can’t hear bad things about Nandini. People want Nandini to leave from the building. Kunal explains them that its Rajdeep’s mistake, who has ashamed his wife by leaking the MMS, Nandini is a victim in the case, and they should support her. The people then realize that Nandini is facing much sorrow already and they should support her.

Tai ji brings an alliance for Naina. The guy Sharad comes to see Naina and praises himself. He tells that he works with Dilip Virani. He tells that he aims to become a bigger CA than his boss. He tells Naina that his friends tell that he is much handsome. Naina looks at him. Sharad smiles looking at her. Sameer has become Devdas and leaves the house for some peace. Mama ji and Mama get worried.

Bepannaah:
Zoya gets to know about Aditya’s plan to return to Paris after the party. She confronts him and tells that she made just one friend in her life, and that’s him and says you didn’t think how will I feel after you leave again. Aditya tells her that it is not easy for him to go far from her. Zoya says I don’t believe you. Aditya gets angry and asks her to go if she doesn’t believe him. Anjana plots to separate them and locks Zoya inside a car. Zoya gets locked up and shouts to Aditya for help. Aditya searches for her and shouts. 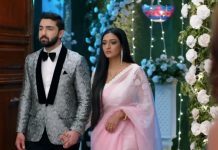 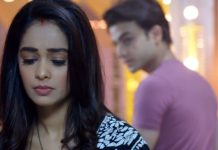 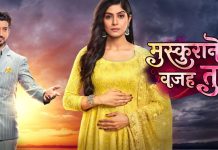