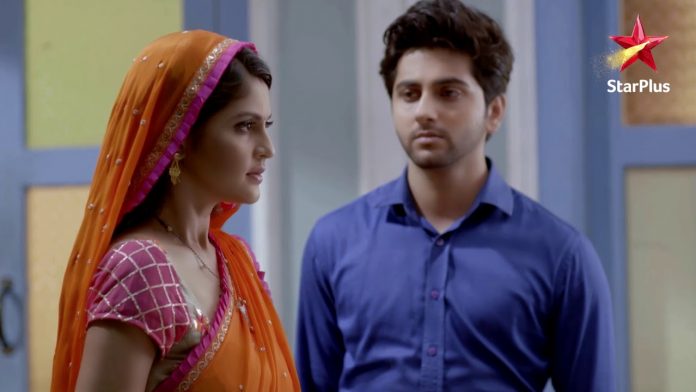 Radhe greets Krishna to start their morning with a smile. He wishes her for Teej. Krishna tells him that there is nothing between Prashant and her. Radhe believes her. Krishna gives him answers to clear his doubts. Radhe learns the truth of her past. He stays happy like always. His mum asks him how can he take the tension casually. Krishna tries to help Bela and Lali in kitchen and prepare the sweets for Teej. She tries to behave normal, but the family members stay rude to her. Krishna gets berated by Radhe’s mum again.

Radhe supports Krishna. Radhe’s mum gets angry on them. She asks Krishna to leave Radhe alone for some time and permit the family to talk to Radhe. She asks Radhe to close Prashant’s chapter.

She wants Radhe to see Krishna’s real truth. She says I couldn’t sleep all night by this tension, what’s happening between Prashant and Krishna, find out the truth. She tells him that she stood with Krishna, when wrong happened with her, but this is totally wrong, he shouldn’t be blind in love, Prashant should be away from Krishna, no one will give money to someone without any profit or reason, Prashant is still after Krishna. She says Prashant would be making some plan, explain Prashant that he was past of Krishna and you are her present. Radhe agrees to his mum.

Radhe visits Prashant for a purpose. Radhe knows that Prashant has bailed out Dubey. He returns the money to Prashant. Radhe has got money after winning the money reward from the wrestling match. Prashant refuses to keep the money and tells Radhe that its about Krishna, who is much dear to him, he won’t take the money for helping Krishna’s dad. Radhe gets angry hearing Prashant talking about Krishna with love. He tells Prashant that Krishna is his wife, and nobody has a friendly right on her. He gets miffed that Prashant is still dreaming to get Krishna. Radhe demands him to accept the money and leave from Krishna’s life. Radhe gets into a fight with Prashant. Saajan controls Radhe and takes him away.