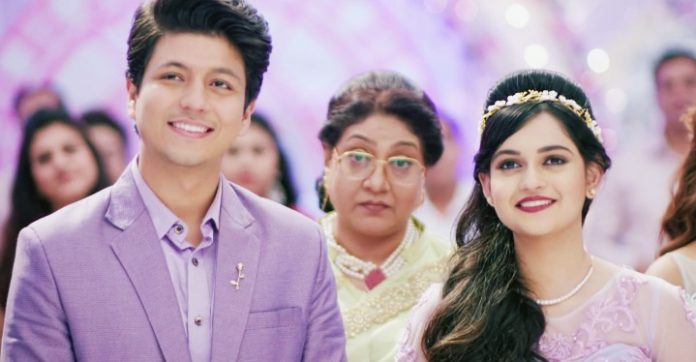 During Mansi and Anmol’s marriage functions, both the families get hopeful of better relations and Kaira’s union. They look forward to the marriage day. Singhanias and Goenkas meet on the marriage day. Naksh and Kirti welcome the guests. Anmol’s welcome and tika rasam happens. They get to see a moment between Kartik and Naira, and turn emotional, wishing that KaiRa reconciles. Kirti tells Naksh that she will not leave her hopes till the last moment. Lav and Kush get Mansi’s letter to them and tells that Mansi isn’t in the room. The family gets a shocking news of Mansi’s disappearance.

Lav tells Surekha that Mansi was much upset and went somewhere. Everyone can’t stand the big shock. Kush asks them to read the letter. Rukmani asks them why did Mansi run away, what’s the reason. Kartik and Naira can’t believe this news too. Surekha reads the letter and learns the reason behind Mansi’s move.

Kartik and Naira feel guilty. Surekha scolds them for having a bad influence on their siblings. The elders don’t understand what to do. Surekha asks Kartik to look what he has done. Suwarna takes a stand for Kartik. She gets another chance to put the blame on Naira, who asked for divorce, against Kartik’s wish. Akhilesh tells Surekha that its better that Mansi has run away, they would have got more hurt if Mansi went for divorce after few days of marriage. Manish asks Kartik and Naira to see the result of their divorce, they aren’t the perfect couple.

Rukmani creates a scene. She tells them that she was afraid for this move by the children. Surekha says I have told Kartik and Naira to stop their divorce proceedings till Mansi’s marriage, Kartik did much drama and fights, he got drunk as well. She asks Kartik did he just get this marriage to ruin by his drama. Surekha yells at Kartik for being a bad brother for Mansi. Manish says Mansi did right, marriage doesn’t mean to today’s generation, we are fools to expect anything from them. Rukmani says we are paying a price for believing in KaiRa. Naksh tells them that Mansi would be nearly, they can find her. Kartik and Naira panic seeing everyone’s worries. Kartik rushes to find Mansi.

Mansi hides somewhere in the storeroom and sheds tears. Kartik and Naira find Mansi and encourage her to go for the marriage, since Anmol is waiting. Kartik asks her to see example of her parents’ marriage, who had an arranged marriage but are still successful. Mansi asks Kartik and Naira can they say the same about their marriage. She takes a big risk and tries to unite them. She asks Kartik why is he asking her to try, if he can’t give a chance to his marriage. Anmol also comes there and tries to explain Mansi, that their marriage will not suffer. KaiRa convinces Mansi to return to the mandap. Anmol takes his bride to the mandap. Mansi and Anmol will get married.