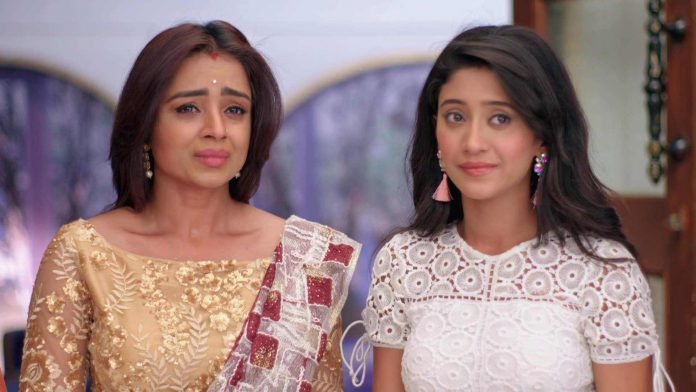 YRKKH: REVEALED!! Suwarna and Naira team up for unusual motive… Naira realizes that Kartik will confront her for her decision. Still, she acts unconcerned towards him. He gets a big shock when he finds her ignoring him. Manish wants to know where did Kartik go. He gets worried. Dadi also feels restless and worried for Kartik. Suwarna tells them that something is going to happen. Dadi learns that Kartik was going to marry Naira. She gets a big shock with this news. Kartik confronts Naira for not coming to the temple and not informing him. He asks her why didn’t she come. Singhanias want to know the matter. He tells Naira that she has to answer him. She tells him that their decision to marry without informing the families was wrong. Her family can’t believe their planning. Naira tells them that she didn’t tell them, since she realized her mistake. She tells him that she felt that he will understand on his own.

He asks her how can she be so casual. She denies to marry him. She tells him that they should give some time to their relationship and not commit any mistake like before. Kartik gets heartbroken, listening to her plans of moving on and focussing on career. He asks her why is she suddenly denying to him. He knows she loves him. He tells her family that they love each other and want to marry. He asks Naira the reason for refusing for marriage. She apologizes to him. He refuses to accept her decision. He apologizes to her for all of his mistakes done in the past. He tells her that he has broken her heart, but he is really repenting. He asks her not to punish him. She tells him that she has decided this for their betterment. Kartik gets angered on her unconcerned attitude.

He feels he has lost her once again. He feels cheated by her silence. He exits from her life and shuts the doors for her in his heart. He cries on their relation’s dying down. Naira faces the family’s confrontation. She apologizes to them for her mistake. Kartik returns home and tells Suwarna how Naira denied to marry him. He reveals that Naira has cheated him, he lost his love. He tells the entire matter to Suwarna and family. He cries on his break up. He finds hard to accept the heartbreak. He tells the family that he can’t forget Naira. Suwarna consoles Kartik. Manish scolds Kartik for getting himself insulted this way. Kartik tells Suwarna that he couldn’t convince Naira.

Manish tells him that Naira isn’t meant for him. Kartik can’t accept the shocking reality. Manish gets angry that Naira has broken Kartik’s heart. He holds Naira responsible for Kartik’s sorrow. He feels so bad seeing his son broken down. He feels Naira should have married Kartik and not cheat him this time. Goenkas want to know Naira’s reason for dumping Kartik this way. Manish also shatters with Kartik’s shattered state. Naksh and Kirti tell the families that Kartik and Naira are driving everyone mad, why did they not marry when they decided to marry. Kirti feels sorry for Kartik.

She wonders why did Naira cheat Kartik this way. Kirti feels Naira is at fault this time. She tells them that Naira has done wrong with Kartik this time, if they decided to marry, if she has given hopes to Kartik, she should have not broken his hope. Naitik worries that Naira will be blamed once again. Naira gets sorrowful over breaking Kartik’s heart. She hides her intentions from everyone. She teams up with Suwarna. They both love Kartik equally. Naira asks her to help her for Kartik’s sake, since their separation is best for everyone. She seeks Suwarna’s help to create hatred in Kartik’s heart for her.