Kundali Bhagya: Rithvik decides to tell everything to Rishabh, feeling guilty of betraying him. Monisha convinces him not to tell anything about Prithvi, else their life will be in danger. Sherlyn’s plan fails to emotionally blackmails the robber to leave her, and telling about her pregnancy. Other robbers bring Karan, Preeta and their families there. Robber asks Sherlyn which month of pregnancy is going on? Sherlyn gets tensed to answer, and worries that her pregnancy truth is revealed. Karan, Preeta, and others look on shockingly. Sherlyn has no other way than to make an excuse that she lied to him. Robber gets angry on Sherlyn for trying to fool them. He threatens to harm her. Sherlyn falls in trouble both ways.

Tujhse Hai Raabta:
Kalyani convinces workers not to give a statement against Aao Saheb and Vivek. She doesn’t want to give a chance to Malhar to arrest Anupriya along with Aao Saheb and Vivek. She promises to repay their money and asks for some time. Worker appreciates Kalyani’s values in front of Anupriya and says although you didn’t give birth to her, she holds the same values as you. Anupriya says I have no daughter and you people don’t want to work for free. She announces that she is mortgaging her side of the house. Kalyani is left shocked.

Kumkum Bhagya: Abhi reaches school to meet Kiara. Pragya doesn’t see him when he reaches there. Abhi takes Kiara to his house and asks if she ever thought why her heart asks her to call him dad, why he calls her a daughter. He asks did you ever think and says because I am your father and you are my daughter. Kiara listens to him carefully and hugs him. She is unaware of the truth and thinks Abhi regards her as his daughter. Abhi tells her that she is indeed his daughter and their likes and dislikes are same, even their behavior, talks and appearance resembles so much. Kiara finds his points valid and thinks if he is really her father. She wants to question Pragya about her biological father. 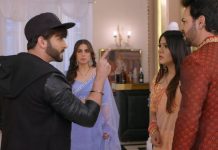 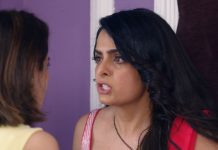