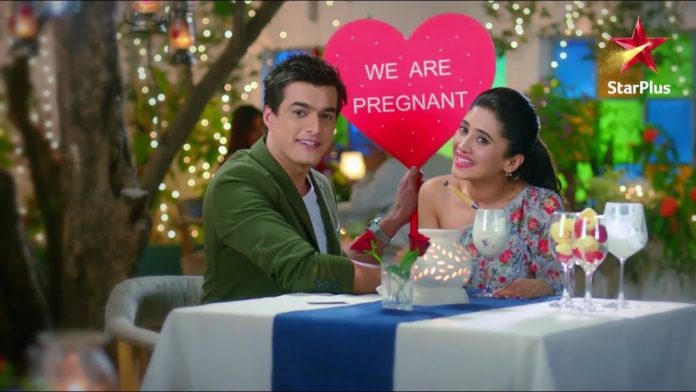 Yeh Rishta: Kartik and Naira get the news of Naira’s pregnancy. Naira’s birthday celebrations will be seen as well. Kartik plans a special birthday surprise for Naira, and also fulfills her birthday wish. After the fight regarding the baby, he agrees to fulfill her wish, if this gives her the ultimate happiness. Kartik tells her that he doesn’t want the child, since it will risk her life. She stays firm and promises him that she will not be careless about her health. Naira desperately wants to become a mother, not caring about her health issues. Kartik doesn’t want to break her heart. Kartik gives up in front of Naira’s stubbornness. He gets supportive of Naira in her early pregnancy days.

The couple will be seen having cute romance in the journey of their pregnancy. Kartik and Naira together, celebrate THEIR pregnancy, since they believe the child is turning both of them into parents, and pregnancy won’t be limited to one parent. Kaira bring a new approach, where especially Kartik puts up a different ideology. Kaira shout out ‘We are Pregnant’, with cheerful happy smiles and spread joy around, to welcome their little bundle of joy.

Krishna Chali London:
Krishna will be seen taking a flight to London for accomplishing her dreams of becoming a doctor. She wants to treat cancer patients and save people. She believes in dreams and turns them into reality. She gets thankful to Radhe for supporting her and fulfilling her dream. Krishna has succeeded to win her in-laws’ hearts by saving Shukla and Radhe’s lives. She fulfills her promise to her mother, that she will become a big doctor. Radhe wishes her all the best for her new journey. Krishna begins embarking on a journey never imagined before.

Muskaan gets influenced by Sir ji’s words, who asks her not to cheat Gayatri’s heart. Muskaan doesn’t want Gayatri to face any shocker. She fears that her truth will be out and ruin everything. Muskaan wants to tell the truth to Gayatri herself. She gets scared and tries to gather courage. She gets interrupted by Ronak, who doesn’t let her speak the truth. Muskaan loves Gayatri as she loves Aarti. She decides to tell her about the fake marriage and deal with Ronak. She refuses for the marriage, which shocks Gayatri a lot. Sir ji gets on cloud nine that Muskaan won’t be marrying Ronak. Ronak assures Muskaan that he will do something to stop the marriage, without breaking anyone’s heart.

Rohan and Karan get a huge shock knowing their mom has lost to Bhallas. They didn’t expect their mom to lose out when their lives are at stake. They didn’t care for Aaliya and Ruhi’s heartbreak ever. Bhallas want to reform them so that they value relations. Bhallas don’t want to free Rohan and Karan so soon and easily. Karan faints by the shock, only to get saved from serving Bhallas more. Sudha rushes Karan to her hospital, only to carry ahead the drama. She bribes the doctor to inform Bhallas that Karan has turned weak and can’t do any work now. Sudha and doctor’s conversation gets overheard by Ishita.

Ishita teaches them a lesson by declaring that Karan is dead. This makes Sudha shocked. Sudha gets worried for Karan and tells Ishita that Karan is fine, nothing has happened to him. Raman and Ishita mock Sudha for the drama and take their servants Rohan and Karan home with them.