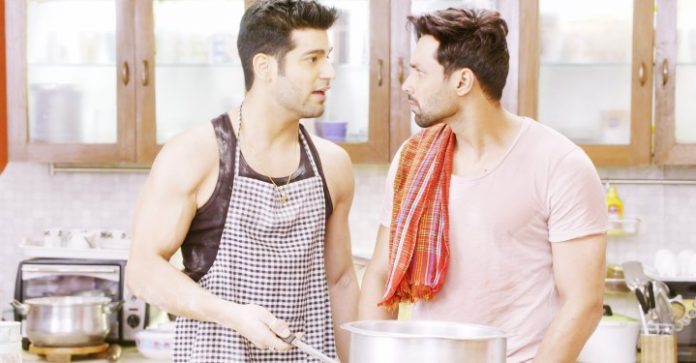 Yeh Hai Mohabbatein Rohan and Karan’s new strategy: Ishita scares Sudha and Rohan by lying to them about losing Karan. She tells them that she will revive Karan and save his life since he is Ruhi’s husband. Sudha tells them that Karan is fine, the cables of the machine aren’t connected. Ishita makes Sudha admit her crimes. She ashames Sudha for using her son in her revenge battle. She tells Sudha that she knew her drama very well. Sudha tells Ishita that she has done everything for the sake of her sons. Raman doesn’t let Rohan and Karan free. He wants to trouble them further and teach a lesson to Sudha. Raman plans to make them work as watchman and peon. Aaliya and Ruhi support Raman, going against their husbands. They want Rohan and Karan to get good training in their office.

Karan becomes the peon, while Rohan becomes the new watchman. They agree to do the work, thinking office work is simple than the household chores. They get troubled by Bhallas’ tortures. Simmi makes the task tougher for them. She gives them a big cooking task. Rohan and Karan devise a plan to behave good with everyone.

They find something fishy in Bhalla house. Rohan wants to find out what’s Raman and Ishita planning next. They spy on the family and learn about Simmi’s sorrow over Ananya’s grief. They try to target Simmi and make her against Raman and Ishita. They want to seek Sudha’s help in making the big plan. Ishita is sure that Rohan and Karan will meet Sudha and plan something if they stay together. She asks Raman not to take risk. Raman wants Sudha to see her sons getting insulted. He wants to break Sudha so that he can free his daughters from Sudha’s clutches. Ishita tells Raman that they can never trust Sudha.