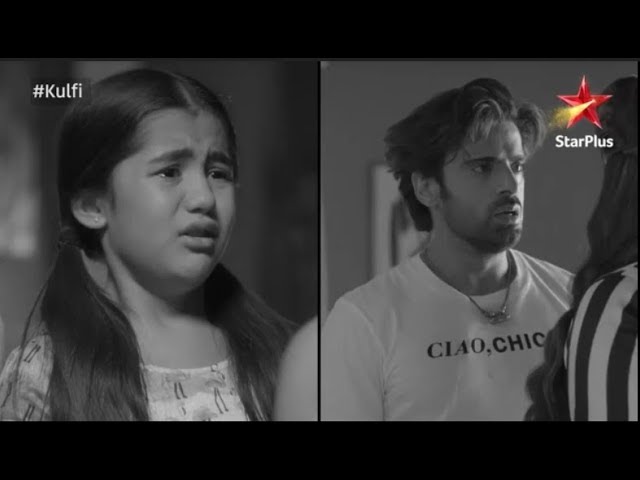 Spoilers Kulfi Kumar Bajewala: Amyra blames Kulfi for breaking her family. She calls Kulfi a dirty girl, who finished their lives and happiness. She tells Kulfi that it will always be her mistake. Kulfi tries to console Amyra. Amyra blames her for stealing her father. Kulfi admits that Sikandar is her father too and wants his happiness. She wants to unite Sikandar and Lovely. Lovely blames Sikandar for not giving her love and making her insecure. She puts the burden of her crimes over his head. She tells him that he is responsible for not loving her and making her negative doer. She vents out anger on him. She asks him to change himself. He tells her that he hates her now, she didn’t win his love because of her evil actions. Sikandar and Lovely angrily announce their divorce, shocking their families and moreover their daughters.

Shakti:
Harman is trying hard to win the challenge of 10 days. He bets to Sameer that he will make Soumya recall their past. He tells Sameer that Harman and Soumya’s love story can’t end this way. He is trying different ways to restore her memory. He realizes that four days have passed, and now he has just six days left for accomplishing the big task. He doesn’t give up easily. He is sure that Soumya will recall everything. It gets too much for her to handle. Harman doesn’t want to stress her and relieves her by getting simple and sweets breaks. He shows her the wall, where they have named their entire family and made the family tree.

Malhar hears Kalyani telling her friends that she wants to go to some cold places on her honeymoon. She likes to see ice mountains and play with snow. He gets angry on her. He asks her to tell her friends that he has really taken her to the cold places. He tortures Kalyani and makes her sit on the ice slab. He asks her to enjoy the cold ice snow now. He asks her to get happy, that her husband got ice for her in the room itself. Her foot gets frozen by the ice. She fails to get up when the baby cries. He demands her to get up and handle the baby. Malhar’s mum asks Kalyani about the ice slab in the room. She asks what’s happening between her and Malhar. Malhar gets the college admission form for Kalyani. He asks her to complete her studies, since he doesn’t want anything to comment on his wife, who just passed 12th standard.

Salim rebels against the family for Anarkali. He can’t bear anyone humiliating or hurting Anarkali. He learns that Maanbai is the person responsible for Anarkali’s pain. He gets angered on Maanbai and tells her that she would never win his love. He gets raging over Maanbai’s insulting remarks on Anarkali. Maanbai couldn’t bear the insult and pleads to Akbar to do justice with her. She can’t see Salim marrying Anarkali. Salim rushes with Anarkali for the early marriage. He doesn’t want to delay his marriage more, assuming more problems to crop. Anarkali doesn’t want to marry Salim. She fears for his safety. Akbar learns about Salim and Anarkali’s love story through Maanbai and Rukaiya. He pledges to make Anarkali’s life hell.

Perfect Pati:
Vidhi couldn’t do justice with Meera. She fails to talk to Rajshri and Pushkar about Meera’s relationship. Meera takes the extreme step and runs away with her love. When the family learns this, they face much humiliation from the groom’s family. Rajshri apologizes to the groom’s family, while Pushkar can’t tolerate Rajshri’s insult. He can’t believe that Meera has defamed them by eloping with her love. He realizes that Vidhi knew this before. He reprimands her for keeping them in darkness and getting them humiliated in such a way. Pushkar goes mad again and punishes Vidhi in anger.

Samar and Jaya get separated. Samar is worried that he will be losing Jaya. There is much misunderstanding between them. Sarika’s marriage was about to break because of Jaya and Satya. Samar supports his family and angrily vents out on Jaya. Rama is supportive of Jaya. She wants Samar and Jaya to get back together. She doesn’t want Samar’s marriage to break. She asks Samar to go to Jaya and apologize, then nobody could ever break this relationship. She lectures Samar on saving his marriage. Samar wants Jaya to come to him and apologize. Jaya is upset with him. Jaya loves Samar and missing him. Samar and Jaya shed tears for each other. Satya asks Jaya to go and meet Samar. Jaya stays adamant.