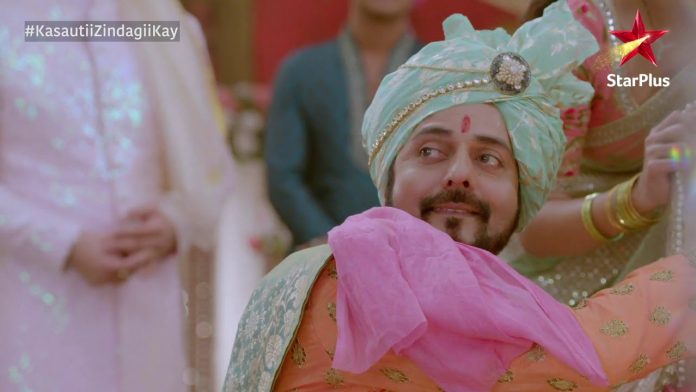 Kasautii Zindagii Kay: Prerna gets angered knowing Anurag had kidnapped her. She heads to the mandap for the marriage. She doesn’t want to get affected by Anurag. Anurag stops Prerna from going to mandap. Anurag yells at Prerna for always opposing his advice and concern. Anurag tells her that he knows that she is marrying Navin for saving her family from house eviction. Prerna breaks down in front of Anurag. She tells him that he shouldn’t care for her. She doesn’t feel that she deserves love in her life. She tells him that she has gone through a bad phase and was compelled to take this decision.

She tells him that the loan is a big amount for her, she is ready to sacrifice her life for the sake of her family’s happiness. Anurag doesn’t want Prrerna to sacrifice her happiness. Anurag understands her pain. He consoles Prerna. She stays adamant to marry Navin. She tells him that her family will lose everything if she backs out from the marriage. Anurag doesn’t let her make the wrong choice. He apologizes to her and faints her down. Prerna tries to reach the mandap to know what happened with the marriage.

Madhuri reveals the truth that Navin is her husband and they have children as well. She exposes Navin in front of them completely. She tells them that Navin is a big liar, he is a shameless person to point finger at her character than giving her respect. She feels sorry to come in Navin’s words to believe him and support always. She yells at Navin. She tells Mohini how badly Navin treats her. She cries out her pain. Navin admits that he is a devil. He tries to hurt her. When he slaps Madhuri, Anurag beats him up. He scolds Navin for disrespecting women always. He tells Mohini that Navin can’t be trusted ever.

Mohini supports Madhuri. Basus learn Navin’s truth. Moloy asks Madhuri why did she get against Navin suddenly, when she played the drama all the time. Madhuri tells them that Anurag has awakened her self conscience, and she has now realized her mistake. Madhuri was insecure that Navin was getting mad for Prerna. Navin was making cheap promises to Madhuri. Madhuri regrets for loving Navin. Mohini feels ashamed to give shelter to Navin. Anurag asks Madhuri to completely unmask Navin’s truth. Madhuri tells them about Navin’s greed. She reveals that Anurag is at least giving them respect, after what they have done with him. Anurag sympathizes with Madhuri. He tells the family that he has kidnapped Prerna to stop her from marrying the devil. Navin doesn’t lose and tries hard to convince Mohini for believing him.