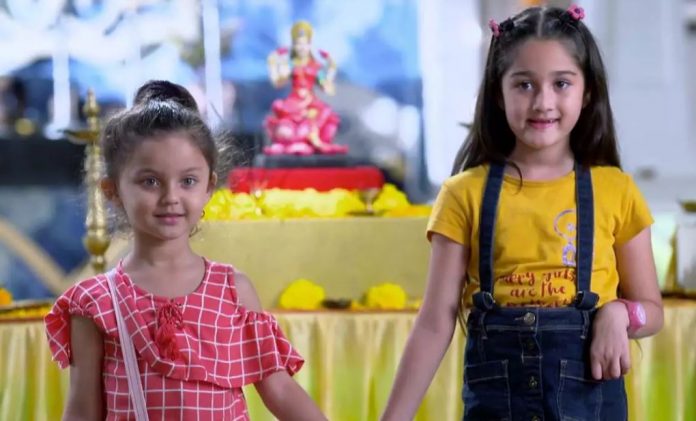 Silsila: Mauli gets into an emotional conflict regarding her feelings for Kunal. She gets doubtful when she finds Kunal with a girl Mahek, who is his very close friend. Mahek reprimands Mauli for coming inside without permission. Mauli gets upset and apologizes to Mahek. Mauli wonders who is the new girl in Kunal’s life. She wants to know if Kunal has an affair with Mahek. Ishaan meets Mauli and surprises her. He tells her that he has come to pick her, his mum is waiting to meet her. Kunal seeks Mahek’s help. He tells her that Mauli is madly in love with him, while Ishaan is madly in love with her. He tells her that he wants Ishaan to marry Mauli so that she moves on. He wants to see Mauli happy.

He asks Mahek to help him in bringing Mauli and Ishaan closer. He wants to make Mauli away from himself, by acting to be in a relationship with Mahek. Mahek finds him a best person and likes him. Radhika looks after Pari in Kunal’s absence. Mishti vents out anger on Mishti. Radhika tries to stop the girls’ clash. Pari yearns for a family like Mishti has. Mishti scolds Kunal and tells her that its her family and she won’t share them with anyone. Radhika doesn’t want Mishti to behave bad with Pari.

Mauli stays upset over Kunal and Mahek’s friendship. Ishaan observes her and asks her if she is upset about Kunal, if there is any problem. Mauli lies to him. She doesn’t want to have any love or hatred feelings for Kunal. She wants to spend her life with Ishaan. Ishaan confesses love to Mauli. Mauli likes Ishaan’s innocent confession. She gets disturbed when she spots Kunal and Mahek at the same restaurant. Ishaan gets to see Kunal and joins them. Kunal and Mahek get into the drama action and act romantic to break Mahek’s heart. Mahek tells them that she has come from London just to celebrate Kunal’s birthday. Mauli gets angered on Kunal. She tries to limit her feelings. Mishti gets insecure of Pari. She takes a big step and locks up Pari inside the washroom.

Pari gets too scared and shouts for help. She gets fainting. Kunal gets praising Mahek. Mauli gets insulting Kunal, who left her for Nandini. Mauli’s grudge for Kunal gets evident. Kunal is happy that Mauli is hating him again, and will limit her feelings now. Ishaan calls Kunal to be a lucky man. Mahek tells them that Kunal is a loving person, he never complains. Pari faints in the washroom by a panic attack. She fails to get help from Radhika. Radhika looks for Pari, but Mishti stops her from reaching Pari.

Kunal and Mahek’s relationship irks Mauli. Ishaan asks them about their friendship, how did they meet. Mahek tells them that she is Nandini’s good friend. Mauli gets a shocker, since Kunal has done the same thing last time, he left her for Nandini and now forgotten Nandini for Mahek. She feels Kunal can’t be trusted. She changes her mind. She realizes Kunal’s truth and blurts out anger on him. Kunal is happy to fall in Mauli’s eyes. He wants to free her from past baggages. He wishes Mauli gets happiness. Radhika finds Pari unconscious in the washroom. She gets a huge shock, unaware that Mishti is behind this. Radhika and Dida learn Mishti’s evil act and get too disappointed. They fear for Kunal’s reaction on Mishti’s misdeed.