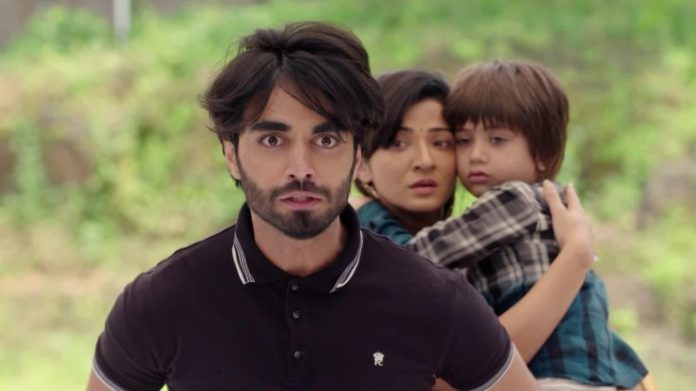 Spoilers Aapke Aa Jane Se: Bhoomi lies to Sahil about their fake love story. She tries hard to convince him. She wants love in her life. She madly loves Sahil. She doesn’t want Sahil to get back to Vedika. She is taking advantage of Sahil’s memory loss. She wants Vedika to get out of their lives. She knows once she marries Sahil again, Vedika won’t be able to do anything. Vedika determines to stop Sahil and Bhoomi’s marriage. On the other hand, Jacky’s brother Guddu makes an entry home. Guddu and Arya have a fight initially. They turn into friends. She is happy when Guddu is around. Guddu sings a song for Arya. Arya likes her favorite song. Arya has much negativity in mind because of Puneesh. She gets liking Guddu. She thinks of moving on in her life. She realizes that she maybe falling in love with Guddu.

Udaan: Chakor gets worried when Anjor gets kidnapped. Imli happens to visit Chakor in the haveli. She comes to attend the party. Imli learns about Anjor’s kidnapping too. Imli is repenting for her crimes. Chakor has blamed Imli for the kidnapping. Imli cries and tells Chakor that she isn’t behind the kidnapping.

Imli clarifies that she has harmed them before, but now she isn’t involved. Chakor slaps Imli for her numerous lies. Imli tells Chakor that she is happy for the happiness in haveli, she doesn’t want to come between their happiness. She asks Chakor not to insult her, she is innocent. Chakor questions Imli and calls the police. She doesn’t know if the kidnapper is Imli or not. Imli pleads her innocence. She tells Chakor that she will help her in finding Anjor. She requests for forgiveness. Chakor doesn’t believe her. Raghav also confronts Imli. Imli tells him that she could have easily taken revenge on them if she wanted. She expresses her emotions for the family. Raghav tells her that he doesn’t believe her crying avatar.

Main Maayke Chali Jaungi:
Samar becomes band artist. He realizes his mistakes over ousting Jaya. He gets tilak from Rama. He gets into a different avatar and takes his baraat to Jaya’s house. Samar has got time to mend his relationship. He wants to stay with Jaya in her house. She wants to change Satya’s thinking as well. He will bring a change in Satya’s family by mending everything.

Kundali Bhagya: Prithvi comes to Sarla’s house to check on Janki. He slips and tells that he was excited to see her speedy recovery and that’s why slipped. Janki recognizes him and asks what you were doing in the hospital wearing doctor’s apron. Karan is suspecious of Prithvi still and determines to expose him. Monisha thinks how to stop Rithvik from telling Karan about Prithvi and gets an idea. She thinks Rishabh will break the deal of 60 crores with Rithvik and she won’t let this happen. She decides to harm him to protect their truth.

Roop: Roop tells Shamsher that he will come with him for the court hearing of the latter’s case. Shamsher says I don’t need you. Roop says I know you don’t need me, but this is my duty and I won’t back off from my responsibility. Roop runs to his jeep and sits before Shamsher. Shamsher drives the jeep. Few goons attack them. Shamsher and Roop get down from the jeep. Shamsher tries to alert Roop and shouts his name when the goon is about to hit him. The goons hit Shamsher badly. Roop fights with them. The goon shoots at him shocking Shamsher. Ishika recalls Roop’s words for her in the hospital and hopes he gets well soon. Haren Patel, his sons, and Ranvir have conspired to get Roop killed.

Muskaan:
Ronak gives a tea party to the family. They come to a resort to have a good family time. Ronak and Muskaan target Sir ji again and get Jaya and Shalu home. When Shalu calls Sir ji as dad and goes to him, Sir ji hides and jumps into the swimming poll. Sir ji doesn’t want Gayatri to know his truth. Ronak is taking Sir ji’s tests. Sir ji doesn’t like the problems coming in his life because of Ronak. It gets funny when Sir ji avoids Jaya and Shalu in front of Gayatri. Everyone rushes to help Sir ji. Ronak is troubling Sir ji, since the latter has hurt Gayatri a lot and played with her emotions. Ronak brings Shalu in front of Sir ji. He wants Shalu to speak the truth to the family and expose Sir ji. Ronak gets blackmailing Sir ji. He wants Sir ji to mend his ways and reform.

Guddan throws a Christmas party. She gets happy. She isn’t aware of the Bahu’s new plotting. Guddan will be turning into Santa Claus. The bahus want Guddan to be away. They keep shocking conditions in front of Guddan. They ask Guddan to end ties with her family. They lay a trap for Guddan so that Guddan goes away from their lives. Akshat supports Guddan on learning this.