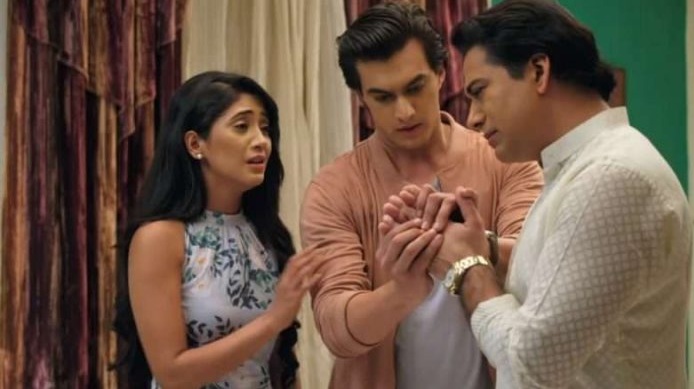 YRKKH SHOCKING Kartik and Naira’s happiness turns into bad news. Kartik fears that Naira will be dying if she goes ahead with the pregnancy. He doesn’t want her to continue the pregnancy. He gets a nightmare where he has lost Naira because of the baby. Kartik doesn’t want his dream to turn true. He recalls the last time when he got similar dream and nearly lost Naira due to the blood clot in her brain. He doesn’t want the clot to recur. Kartik repeatedly gets the nightmare. Kartik is afraid for Naira’s life. He doesn’t know what will happen if anything happens to Naira and baby. Kartik is worried for the coming member in their family.

He is just concerned for his family, who shouldn’t break apart because of any complications. Doctors tell Kartik that Naira’s pregnancy and delivery may get complications which can take a toll on her health and life as well. Kartik doesn’t want any side-effects to harm Naira. Kartik is the only one who knows the truth. Naira and Goenkas will get a big shock when this bad news reaches them. Kartik meets the gynac to take a second opinion about Naira’s pregnancy case. However, things don’t change even after that. The doctor tells Kartik that its too risky for Naira to continue the pregnancy, she should better opt for abortion.

She asks Kartik to convince Naira for the abortion, knowing its a painful process for any mother. Kartik loses courage to tell Naira about his decision to go ahead with her abortion. He was happy for her pregnancy, but is too afraid to lose her. Kartik and Naira’s life will be going through a rough patch once again. Kartik signs the abortion documents. Naira happens to get that papers and receives a huge shock. Naira didn’t know that Kartik has taken this big shocking decision. Kartik finds it difficult to choose either of Naira and baby, but he chooses Naira.

Kartik and Naira post their happiness on the social media. They post ‘We are Pregnant’ after fighting for the baby. They have a cute argument, followed by many smiles. Kartik tells her that it will be bad if they fight after the baby comes. Naira tells him that they have to change. She feels hungry and goes to have food. Kartik gets disturbed by the nightmare. Manish pacifies him and tells him that he can understand him well and know his feelings of stepping into fatherhood. He asks Kartik not to let any fear get over his happiness. He tells Kartik that even his mother Soumya wasn’t strong much, but she has managed her pregnancy well.

He feels even Naira will be able to handle her pregnancy in a magical way. He asks Kartik to go with the flow instead of worrying for Naira’s health. Kartik gets his assurance. Meanwhile, Naksh and Kirti spend some good time. Naksh cracks jokes to make her laugh. She is happy that Kartik and Naira will be soon becoming parents. He is also happy that Naira will be becoming a mother soon and achieve the biggest happiness. Naira finds Kartik cooking for her. He tells her that he is cooking food for his wife and for his baby. Naira doesn’t feel any morning sickness. She gets stressed. Kartik wants Naira to have normal pregnancy symptoms. He gets afraid that her pregnancy symptoms are different and maybe problematic. He wants Naira to be happy and smiling, rather than getting stressed about her pregnancy.

Dadi asks Kartik not to take Naira to the hospital for every little issue. She understands Kartik’s concern. Kartik asks Naira not to take any tension. He recalls the pandit’s prediction that he will get a daughter soon. Dadi wants a son for Kartik and Naira. Kartik tells Naira that he wants to meet the doctor and know the precautionary measures. Dadi calls up the pandit to discuss Kartik and Naira’s kundli again. She gets calls from her friends, who congratulates her for Naira’s good news. Dadi gets angered that Kartik and Naira have spread the news and invited troubles. She doesn’t want them to announce the pregnancy. Manish and Akhilesh support Kartik and Naira. Naira apologizes to Dadi.

Dadi tells them that they shouldn’t mention We are Pregnant, since a man doesn’t get pregnant along with his wife. She asks Kartik why is he making fun of them. Kartik tells Dadi that the baby belongs to both Naira and him, that’s why he shared the happiness. Dadi gets angry that Kartik always argues with her. Naira understands Dadi’s concern and removes the post so that Dadi doesn’t get upset. She wants to end the problems in the family. Naira gets dizzy when Kartik takes her to the hospital. He turns panicking and rushes her for check up. He doesn’t want Naira to suffer.

Doctor tells Kartik that dizziness is a normal symptom in pregnancy. Kartik gets many questions to ask. Doctor hides the complicated case of high risk pregnancy from Kartik. Kartik still overhears the problem and gets questioning the doctor so that he can mentally prepare himself for it. Doctor makes the suggestions to Kartik. He tells Kartik that they should try to nullify the complications by taking a step in time. Kartik fears that his nightmare can get true.