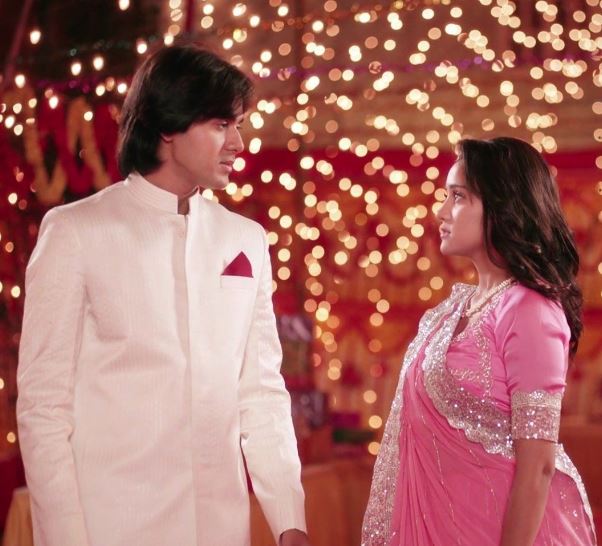 Yeh Un Dinon Suicide Wala Twist by Sameer does wonders for the love story. Sameer proves that he is madly in love. He goes crazy to achieve his goals. He wants to marry Naina. He finally convinces his parents to help him win his love. He doesn’t want to fail in his love story. He has been in the relationship since long. He wants to take the relationship to the next step of marriage. Sameer keeps his promise to Naina, by getting their alliance talks ahead. Sameer and Naina are ready to bear any problems, only to unite. They want to marry at any cost, but with the consent of their families. The meeting between their families goes on well. Naina gets high on hopes again. Naina’s dad doesn’t want to get Naina married to Sameer. He keeps numb. Sameer’s dad is also against the marriage, but is helpless.

Both the families keep upset faces when they meet, but then get talking because of the sake of their children. Vishika tells them that they should consider the relation for Sameer and Naina’s happiness. Naina feels there will be many problems coming ahead. She wishes that nothing goes wrong.

When Sameer sees the talk going somewhere else, he attempts to hurt himself. He threatens of suicide again and erases the lines on his hand to change his fate. He tells them that he has got Naina’s name in her fate now. She shows his bleeding hand shockingly. Sameer compels them to fix the marriage. Moreover, Sameer and Naina meet at a cafe. She gets angry on him, knowing he has hurt himself. He convinces her with love. He tells her that she will be soon turning into his wife, but he won’t be bearing her tantrums that time. He cutely teases her. They get red color on their hands. They are very excited for their marriage. Sameer tells her that they will be soon uniting. They spend romantic time.

Naina’s kundli has a problem. Sameer tells her that he will call her Naina ji after marriage, but usually wives add Ji to their husband’s name after marriage. He tells Naina that he will try his best to keep her happy. She tells him about the kundli dosh, that’s worrying her. Their love is getting a name after long time. They have struggled a lot to get a recognition for their love. He asks her what does she mean by kundli dosh. He tells her that he loves her a lot, she is his life. They have a cute filmi moment of love clashes and emotional blackmail. He tells her that he has fought with his family only to marry her. She tells him that she also got enough slaps from her family in order to marry him.

She tells him that she will die, but not remarry anyone. They decide that even if its written in their kundlis, but they will never remarry again. They join hands with the colour of love, so that their fate becomes favorable for them. Sameer tells them that they will write their own fate and be together. He gets a ring tester for her, to get her finger ring size, so that he can buy a ring for her. He tells her that he will make the best ring for her. Naina likes his special gesture. Many cute moments of Un Dinon continues. Keep reading.