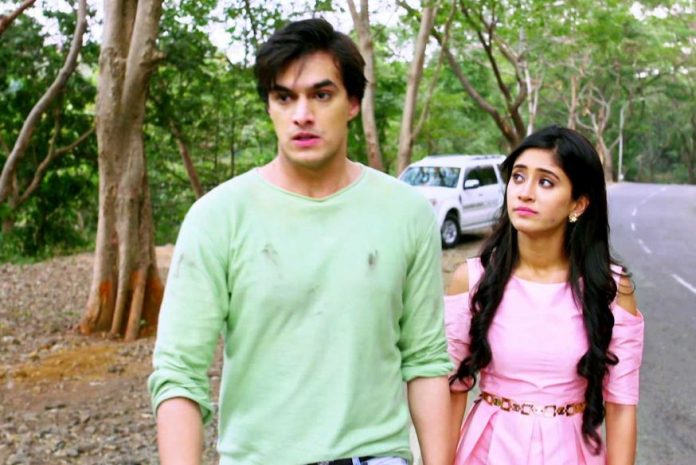 Yeh Rishta Abortion twist: Kartik anxiously waits for Naira at the cafe. He buys cute baby toys and thinks Naira will understand his decision when he gifts her baby toys. He waits for her in a filmi way, talking to himself and making preparations of the surprise, while imagining her happy reactions. His wait gets prolonged. Kartik talks to the baby toy and tells that Naira will be happy seeing it. He has accepted to have his baby. He doesn’t want Naira to abort the baby. He just cares for Naira and the coming baby. He wants to become a father. He feels the baby is really a bundle of joy, he shouldn’t have any thinking in mind.

Kartik calls up Naira to know about her. He learns that she is at the hospital and talking to doctor right now. The nurse tells him that Naira can’t talk to him. Kartik thinks Naira has done the right thing to reach the hospital at the appointment time.

He tells baby that Naira will become a good mother, since she is much caring towards the baby. Naira doesn’t come to meet him. Naira is at the hospital and wants to abort the child. She witnesses a couple fighting.

The man scolds his wife for getting stubborn and giving birth to their child, when she couldn’t manage the baby on her own. He tells her that she was wrong to think everything won’t get fine if the baby comes. He is angry that she has lost her health and also put the baby in high risk by being adamant. He asks her to think how the family is handling the baby now, when the baby is crying for his mother. He makes his wife realize her mistake. He tells her that she should have not planned the baby when she had much complications.

Naira witnesses their arguments and realizes that she is also stubborn to have a baby, while Kartik is against her decision, having similar fears. Naira feels sorry and thinks to agree with Kartik’s decision to abort the baby. Kartik calls up at the hospital again and asks about Naira, if she is still there. The nurse tells him that Naira is undergoing the abortion procedure, Kartik should be there as well to support his wife. Naira cries when she goes for the abortion. She is given the phone to talk to Kartik.

She wants to tell him that she is obeying his decision, since she loves him a lot. Kartik misses to talk to Naira, when someone collides with him and makes him drop the phone. Naira gets disheartened taking Kartik’s silence as a yes. She gives back the phone and goes for the procedure. Kartik gets a huge shocker about abortion procedure. He didn’t know that Naira has gone to ruin their dreams and happiness. He feels guilty for pushing her for abortion. The misunderstanding brings a big storm in their lives. Naira wants to comply with Kartik, knowing he isn’t totally wrong to madly love her over any happiness. Kartik rushes to save Naira. He regrets for forging her signs on the form and making the abortion possible. Kartik will reach Naira and make an apologetic confession.