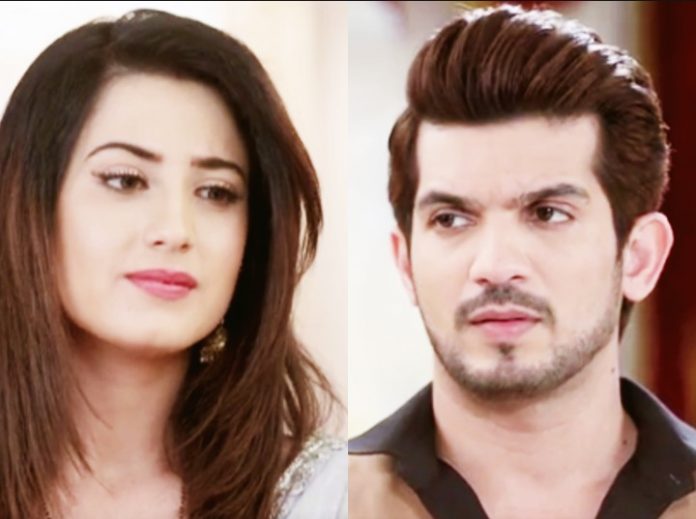 Quick Reads Ishq Mein Marjawa: Deep and Aarohi get into a fight with Mr. X, who wanted them to steal the costly diamonds. Deep doesn’t want Mr. X to take advantage of them. He asks Mr. X to reveal his identity. He tries to remove the mask and know who is behind the conspiracy. Mr. X runs away. Deep takes Aarohi’s help to save Vasundara’s life from Mr. X’s dangerous gadget. Deep then gets doubtful about Aarohi’s intentions Rarohi asks him not to doubt on her, since he has saved him from death. She tells him that Abhimanyu fell unconscious. Deep says even Tara and Virat are unconscious in the other room.

Internet Wala Love:
Aadhya brings her fake boyfriend. Jai meets the guy and goes insecure. He doesn’t want Aadhya to have any relationship with someone. Aadhya feels bad to lie to Jai. Jai gets angry on her. Jai gets arrested for a wrong blame, but bribes the police to get free. Aadhya doesn’t know what’s happening.

Udaan: Chakor cries seeing Anjor. Anjor hugs Chakor and asks her the reason for her tears. Chakor is going to tell the big truth to Anjor that Suraj is no more. She finds it hard to tell her. She asks Anjor if she is strong like her. Anjor tells her that she is very strong and can bear any truth. Chakor tells Anjor that Suraj is dead. Anjor receives a big shock. Chakor tells Anjor that Raghav is not her father, he is Suraj’s look alike, Raghav has come home just for her recovery, her health shouldn’t come back. She then changes her words and says if your health gets worse, Suraj has to end this drama and tell everyone that he is alive, he is having big goals to catch the evil people, he shouldn’t fail in his motives. She asks Anjor to help her protect Suraj from evil people. Anjor agrees to support her.

Aapke Aa Jane Se:
Vedika has a staged performance. Agarwal family helps Vedika and try to show Vedika and Sahil’s love story. Vedika recreates the history, but Sahil doesn’t remember anything. Bhoomi gets a chance to win Sahil. Bhoomi performs for Sahil. Vedika and Sahil have a couple dance. Sahil gets inclined towards Vedika. Bhoomi gets jealous seeing him. She is afraid that Sahil’s memory will come back.