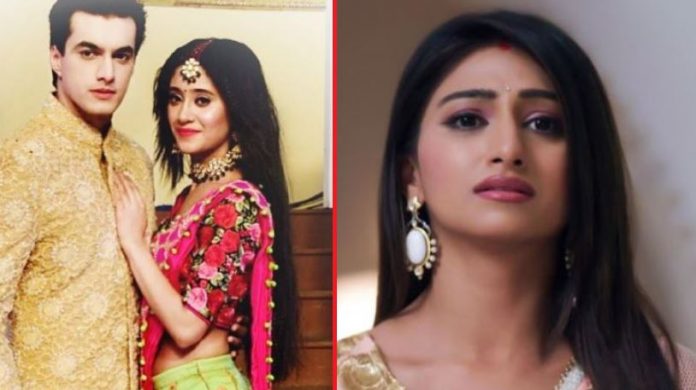 Yeh Rishta Awful Shocker for Naksh-Kirti and Kartik-Naira. Naksh and Kirti’s lives will be back in picture with Aditya’s return. Aditya keeps his interests and intentions hidden from Kirti. He tries to appear positive so that Kirti gets confused over his reformation. Naksh believes that Kirti is afraid of Aditya, which she doesn’t need to. He gets a sudden work call and has to leave urgently. Kirti calms her fears in front of Naksh so that his work and attention don’t suffer. She asks Naksh to go for the work trip. Aditya wants Kirti to meet him for discussing work.

Kirti turns tensed in Naksh’s absence, but gains courage. On the other hand, Manish gets supporting Dadi’s low thinking over the family heir. He also wants Kartik’s son to take he Goenka legacy ahead. Though the family has two grandsons Lav and Kush, Dadi wants the next generation heir, that would be Kartik’s son. Dadi gets adamant to get the tests done to find baby’s gender. She fails to get the tests done at the strange clinic, but she gets help from the same doctor who offers to provide the results by conducting the tests near her house.

Dadi gets emotional and also brainwashes Manish for the test. Manish gets convinced that they have the rights to ensure the coming heir. Kartik asks Naira not to exert herself by participating in the Christmas eve arrangements. He asks her to stay in the room, he will send the food for her and she can look after the baby. Naira gets irritated when the family overloads her with the food and concern. She doesn’t want too much pampering which is annoying her. He puts Naira to sleep and goes for the party. Kartik calls up the manager to arrange a Santa for the party. Kartik has no idea that its Naira’s plan to come in the party as Santa. Kartik dances with Santa.

Kartik and Naira enjoy a lot in the Christmas party. They have a fun dance. Kartik compliments the cute Santa. Naira keeps her Santa avatar a secret. Lav and Kush celebrate Merry Christmas with the Secret Santa. Naira’s entry as Santa spreads joy in the family.

From kids to elders, everyone enjoys the most. Naira hugs and kisses Kartik. Kartik then understands that Naira had come as Santa and eat much chocolates in the party. He realizes that Naira has done her wishful and enjoys well.

Naira is in Santa’s avatar, unknown to Dadi. Naira asks Dadi her wish for the Christmas eve. She gets the goodies for everyone. Dadi returns the gift to Naira and makes a unique wish that she wants Kartik and Naira to have a baby boy. Dadi also reveals that she had taken Naira for the tests to know the baby’s gender. Naira removes the Santa’s wig and beard. Dadi receives a shock on seeing her.

Dadi comes to know that Naira is the Santa. Dadi fears that her wish has broken Naira’s heart. Naira gets upset and leaves from the party. Dadi fears for Kartik’s reaction. Kartik and Naira learn Dadi’s awful move. Kartik supports Naira against the uni-direction mindset of Dadi and Manish. Naira will attempt to change Dadi’s thinking regarding the male heir. Kartik and Naira will define the girl power, how heirship isn’t just dependent on male child. Will Kartik and Naira succeed in bringing a new change by condemning gender discrimination? Keep reading.

Also read, Jiji Maa: A new problem comes over Rawat family. The family doesn’t know how to face the troubles. Suyash and Falguni get relieved of the gangsters. Suyash gets a shocking call about the workers’ strike. Suyash wants to go to the factory and talk to workers. Jayant and Falguni don’t want him to go alone at night. Vidhaan tells Suyash that he shouldn’t go alone.

Suyash asks Vidhaan to manage the ongoing projects in office, he can’t trust on anyone else and has to end the strike soon, else he will be a big loss for them. He asks Vidhaan to take care of baby. He tells Vidhaan that he doesn’t trust Uttara. He asks Vidhaan not to leave the baby alone for a moment. Suyash doesn’t fear of the outcome and heads to meet the union leader to know their demands. Suyash wants to fulfill the demand and resume the work in the factory. Falguni worries that Suyash won’t be with her, when she will be going to court to give statement against the gangsters. Jayant gets attacked by the gangsters. Falguni wants Jayant to be fine. Falguni shares her worries with Niyati. She doesn’t want Suyash to get attacked by the gangsters.