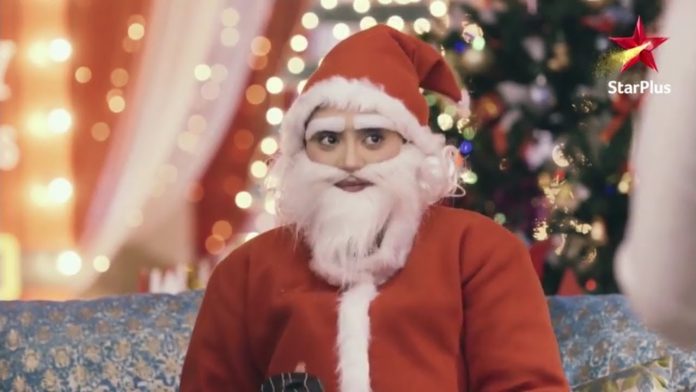 YRKKH Santa surprise brings twists. Kartik and Naira pen down their feelings in their diaries for the baby. They know the baby is very special and decide a special welcome post the birh. Goenkas celebrate the Christmas. Naira gets decked up to attend the party. She requests Kartik to let her join the party. Kartik tells her that its time for her nap and she should be resting in her room at the moment. She gets upset with him for being so strict with her. Dadi tells Manish that once they know the result of the tests, they can find some solution to ensure the heir coming into the family. She tells him that she couldn’t get the tests done of Naira, because of the police raid. She tells Manish that she will still try to find a way.

Kirti and Singhanias grace the Christmas party. Kirti tells her family that Naksh isn’t with her to look after her. Kartik tells her that he will take care of her diet. Kirti doesn’t want his tortures. She tells him that Singhania family is there to take care of her. Kartik tells them that Naira is taking rest in her room. Manish learns about Aditya, who is back in the town for doing a new business. Manish worries for Kirti. He doesn’t want Kirti and Naksh to know about it.

Kirti tells Vaishali that she has decided to join the project on Naksh’s insistence. She doesn’t tell Manish about meeting Aditya. Everyone waits for Santa, while Kartik enjoys some sweets. Dadi doesn’t want Kartik to finish the laddoos meant for Naira. Naira tries to take Santa’s place by stopping the hired Santa. Kartik doesn’t identify her. Naira misleads Kartik so that she can munch on some good things which Kartik and Dadi aren’t allowing her. Dadi wants to take Naira for the tests so that she can know the baby gender.

She talks to the person who gets the medical set up outside her house. Naira gets her hands on some delicious stuff. Kartik lets her eat the sweets, unaware that she is Naira. Naira dances with the kids and enjoys Christmas to the fullest. Kartik and Naira have a dance in the party.

Kirti tells Kartik that Santa is eating a lot. Kartik tells her that Santa is hungry since two days. He asks Santa to have as much food as he wants. Naira wants to let Kartik know that its her. She hugs Kartik out of love. Kartik misses Naira in the party. He thinks to let Naira rest for the sake of the baby. Dadi asks the person to take the ambulance back, she won’t get the tests done. She doesn’t want the family to know about her move. Naira overhears their conversation and asks Dadi what’s her wish. Dadi admits her mistake to lie to Naira and take her for kids. She tells her wish that she wants to have a heir for the Goenka family. Naira gets disheartened knowing the truth. She breaks into tears. She leaves the house and teaches a lesson to the wrong doers. She gets the fraud doctor arrested for the illegal crime.