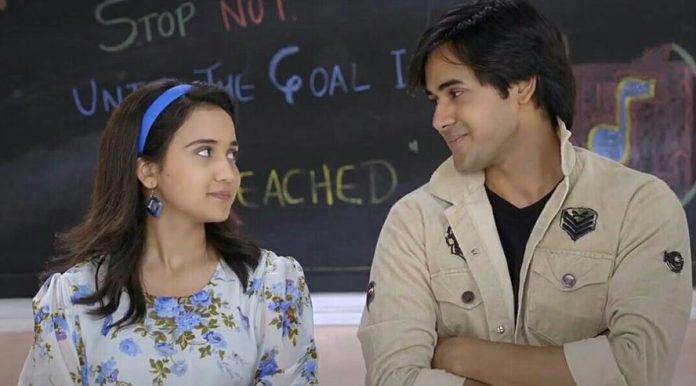 Roop: Shamsher doesn’t accept Ishika as his bahu. He doesn’t want electronic appliances usage in the kitchen. Ishika bonds with Kamla well. She gets a mixer home. She gifts the mixer to Kamla and explains its easy usage. Kamla is scared of Shamsher. She refuses to accept it. Bua sees Ishika gifting the mixer. She informs Shamsher and gets him to the kitchen to show the mixer. Ishika tells him that she has bought the mixer by using the shagun money. Shamsher doesn’t throw away the mixer. He lets Ishika use the mixer and calms down. Bua gets surprised when Shamsher doesn’t make it a big issue. Shamsher asks Kamla to explain the usage of traditional things to Ishika, which is party of their daily routine. He senses Ishika bringing a change in the family. Ishika wants to bring happiness in the family without upsetting Shamsher.

Internet Wala Love:
Aadhya and PK dance in the party. Jai gets jealous seeing them. He is in love with Aadhya, but he isn’t able to accept this. Aadhya tells Jai that she can’t live with him as his friend. She tells him that their friendship is really bothering her. Jai asks her if there is something more to her feelings. Aadhya goes to a corner and sheds tears. Jai and everyone enjoy a lot and party. He finds Aadhya missing from the party. He tries to find her. He is much worried for Aadhya. He can’t accept PK as Aadhya’s love interest.

Aadhya wants to confess her love to Jai. Her feelings get troubling her more. She feels if she loves Jai, she should be ready to bear his rejection as well, but Jai has a right to know about her love. She doesn’t want the denial fear to fail her. Jai realizes his jealousy. He doesn’t think his jealousy is of love, but of friendship. He wants to protect Aadhya. Jai will be realizing his love when Aadhya goes away from him.

Jija ji Chath Par Hai:
Pancham gets stuck inside the cupboard. He wants Ilaychi to free him and save his life, before Murari really burns the cupboard, assuming it to be his late grandfather’s last wish. Pancham knows Murari is really stubborn. Pancham loses his breath and faints down. Ilaychi tries to communicate with him indirectly. When she fails to hear his voice, she gets worried for him. Pintu begs Ilaychi to save Pancham’s life.

Main Maayke Chali Jaungi:
Samar goes for the bath and doesn’t get the water in taps. He shouts to Jaya for help. He asks her to check the water taps, he is waiting to take a shower. She tells him that she has turned off the shower tap by mistake. They get into an argument and have a cute romantic moment. Satya breaks into their moment and takes away Jaya. Samar gives a shocker to Satya by supporting Richa’s love. He wants Richa to go back to her husband. Satya makes a plan and makes Richa admit her pregnancy. Satya can’t believe that Richa is pregnant. Satya reprimands Richa. Samar asks Satya to send back Richa to her husband.