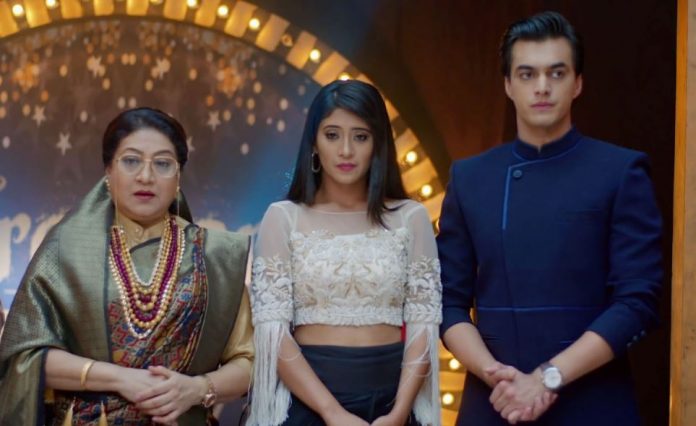 Yeh Rishta Kya Kaira face a shocking moment. Dadi upsets Kartik and Naira by her wish for the family heir. Dadi blindly believes in the Kundli prediction that Kartik and Naira will have only one child and that too a girl child. She doesn’t want a girl child for Goenkas, who would be not fit to become the heir according to the society. Dadi’s constant inclination according to society and superstitions irks KaiRa. They don’t want Dadi to lose her sensitivity towards relations by following the old school customs. Kartik tells Dadi that if Kirti can bring happiness in their house, even his girl child can become the heir of Goenka family. He wants Dadi to respect and love girl child.

Naira too wants Dadi and Manish to stop being cryptic and think of finding happiness in the child’s coming, irrespective of the gender. Kartik and Dadi’s argument goes for long. Manish too stuns Kartik by being unsupportive this time. Manish tells Kartik to name someone who isn’t greedy for a heir. He doesn’t think his mum is doing anything wrong.

He asks Kartik to let Dadi take the necessary measures to bring in happiness. He doesn’t want Kartik and Naira to oppose Dadi and her beliefs. He reminds KaiRa how Dadi’s intuition was absolutely right at the time of Samarth’s entry in the family, Dadi was sensing bad omens and Samarth had really come to break the family. Naira reminds Dadi how they have together handled Samarth and his evil intentions by their family unity. Naira and Kartik have together brought Goenkas out of the mess by resolving Samarth’s hatred. They explain the power of love and hope. She asks Dadi to just believe her and not create troubles. Dadi resents and doesn’t want to give up so soon.

Dadi and Manish discriminate between baby boy and baby girl. Kartik and Naira take a shocking step. Kartik calls the lawyer home. He makes the legal documents ready and asks Dadi and Manish to sign it. He tells them that he has made the contract, its written that if its a baby girl born to Naira, then both Dadi and Manish can’t touch the baby, they can’t feed the baby or play with the baby. He says you can never take baby in arms or cuddle, you won’t be having any rights on the baby. He expresses his wrath on Dadi and Manish. He says if any of you break this contract, Naira and I will take our baby and leave the house. He is much upset with Dadi’s stubbornness. This contract leaves the entire Goenka family shocked.

Dadi and Manish get their hearts sinking and sign the papers. Dadi’s one big mistake draws a line in between the family again. Kartik and Manish also have a clash. Dadi sheds tears. Naira exposes the fraud doctors gang and gets them arrested. Manish says we do have a right to have a heir, as you are wishing for the baby girl. Manish stands by Dadi’s side. Naira wishes to open their eyes in time. She doesn’t want her daughter to face any discrimination. She tells Manish that Dadi has done wrong to cheat her and keep them in darkness. Surekha and Kirti express their anger on Dadi.

They try to change Dadi’s mindset. Devyaani and Bhabhimaa tell Dadi that no one will be able to forgive her if anything happens to Naira’s child. Dadi gets cornered by everyone. Surekha holds Dadi responsible for putting similar pressure on her at the time of Lav and Kush’s birth. She asks Dadi to leave the greed of getting the male child. The family wants Dadi to understand the drawbacks of orthodox mindset.

Krishna and Radhe realize that Veer is Sunaina’s son. Radhe complains to Sunaina about Veer troubling Krishna in the college. He tells her that Krishna has come from too far just to study medicine.

He doesn’t want Veer to ruin Krishna’s dreams. Sunaina realizes the hatred Veer holds for the country for the reason of his father’s huge fraud. Veer holds bitterness and anger towards Indians, and vents out on Krishna. Sunaina doesn’t want Veer to do injustice with Krishna. Krishna and Radhe rebel against Veer. They try to protest and expose Veer’s misdeeds in the college. Veer asks Krishna to go back to her country. She outright refuses and tells Veer that she has paid a bulk amount as fees to become a doctor and will not back off. She just wants to become a doctor and asks him to better help her. Radhe’s protest against Veer gets more supporters. Veer gets helpless to take Krishna back in the batch. Krishna becomes the intern in the hospital and assists Veer. Veer stays miffed with her.