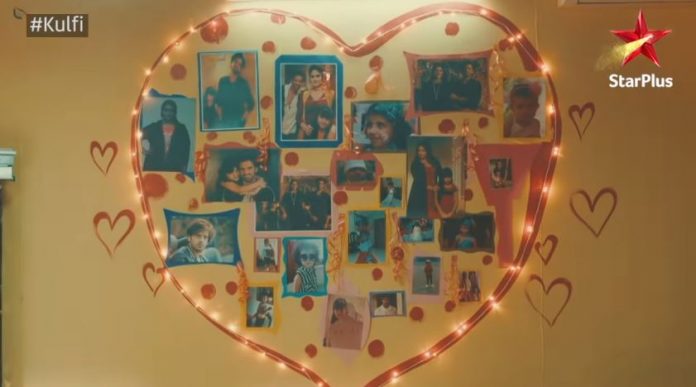 Quick Reads Kulfi Kumar: Kulfi and Amyra are trying hard to get Sikandar and Lovely together by some way. They don’t want anyone to ruin their plans. The kids aren’t aware that Gunjan and Tony have joined hands against Lovely and Sikandar’s union. Gunjan hates Lovely for all the crimes she has committed, while Tony has a big problem with Sikandar’s attitude. Gunjan doesn’t want to accept Lovely in the family. Even Tony wants to break Lovely’s marriage with Sikandar. Gunjan tells Tony that she can help him in making Sikandar away from his daughter. Tony agrees to accept the offer. He wants Lovely to get divorced soon. Lovely and Sikandar meet for the play. Lovely feels connected to Sikandar and wants to call off the divorce.

Jija Ji Chath Par Hai:
Murari shouts at Pancham when he finds something fishy. Ilaychi’s plan fails. She wanted to reveal her relationship to Murari and Karuna. Pancham wants to impress Murari. Ilaychi and Pintu make a plan so that Pancham wins Murari’s heart. Pancham’s entry doesn’t go on well. Pancham gets scolded again. Murari asks him to be at the shop and attend customers. Pancham cooks up a story and lies to Murari about the gold chain theft. Murari gets taunting him. Ilaychi gets upset seeing Pancham’s insult.

Ilaychi tells Pancham that he is a big coward. She gets angry on him and threatens to break up with him. Pancham gets a big shock. He promises that he will convince Murari. He tells her that she can see that he is already trying hard. She asks him to accompany him for her school picnic trip. He doesn’t get permission from Murari. She tells him that its a small thing to do and if he fails to get permission, she will never talk to him ever. Ilaychi hides her love affair from her parents, knowing the complications because of Pancham’s fake marriage with Pintu.

Ishq Mein Marjawa:
Aarohi gets a shocker when she finds Mr. X next to her. He tells her that he is in love with her and wants her. Aarohi tries to run away from him. Aarohi is disturbed by his presence. Aarohi wants to know his identity. Aarohi wants to know Vasundara’s truth. She learns Vasundara’s evil truth. She has seen her real avatar. Aarohi returns home and finds Vasundara in a homely avatar. She gets surprised and wants to know if Vasundara has a look alike. Vasundara tricks Aarohi. Aarohi gets accusing her and scolds her for the murder. Vasundara asks her if she has lost her mind. Deep blindly believes his mum. Vasundara wins his confidence.

Tara and Vasundara succeed to fool Deep. Aarohi wants to investigate further and find the truth. When she reveals to Deep that his mum is evil, Deep doesn’t believe her and supports his mum. Aarohi knows that Vasundara has cheated her best friend and killed her to get the property. Aarohi wants to get Vasundara punished. Deep and Aarohi have a clash over Vasundara’s matter. Mr. X has come in the family with hidden intentions.

Sahil takes a shocking decision. He has always been a friend for Arya. He learns that Guddu has proposed Arya for marriage. Arya accepts the proposal and move on in life. She finds a true life partner in Gudda. She tells Sahil that she wants to marry Guddu. Sahil tells her that she can have a live-in relation with Guddu before going ahead for marriage, so that she doesn’t regret for her decision. He supports Arya. He wants to ensure that Guddu is Arya’s true love. He protects Arya’s future by his decision. vedika isn’t aware of Arya and Guddu’s love story. Arya gets happy when Sahil supports her, but isn’t keen for a live-in. Vedika gets disappointed with Sahil’s decision on knowing the entire matter.

Udaan:
Chakor and Imli get kidnapped by Akash. Imli’s respect is in risk. Akash tries to misbehave with Imli. Chakor attempts to save Imli. Both the sisters bravely fight with the goons. Raghav makes a heroic entry and makes the goons bite dust. Raghav and Chakor expose Akash’s truth again.