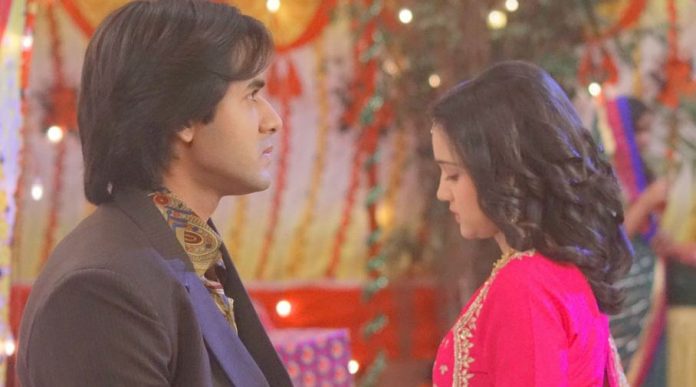 Yeh Un Dinon Anxious Sameer gets upset when his family makes an issue out again. His family refuses to attend his engagement when it happens in compound area of Naina’s house. They want an engagement hall to be booked so that they can at least be answerable to their guests, belonging to rich households. Vishaka is also in two minds over taking the alliance ahead. Bobby outright refuses to be a part of the engagement, where he has to lower his head by shame and avoid society’s taunts. He tells Vishaka that Naina’s family is poor and will not match up to their status. He doesn’t want their community people to judge them over getting Sameer married to Naina. Bobby wants to avoid the ceremony. Mama ji also supports Bobby, Mama ji also refuses to attend the engagement if it happens at some cheap place.

Mama ji keeps his terms in front of Vishaka. Sameer sees the tension forming again, just before the engagement. He asks Vishaka and Bobby what do they really want, their son’s happiness or personal satisfaction.

He gets upset with his parents for valuing their status, class and reputation over his happiness. He angrily packs his bags to leave his family. He tells them that he is moving out of the house and will go to Naina’s house straight. He breaks his decision of marrying Naina at the temple so that no one from both the families act as hinderance. Vishaka gets worried by his new threatening. She finally gives in to accompany him for the engagement for the sake of his happiness.

Ladies Special:
Bindu is very happy. Dr. Amar meets his childhood friend Mani. Mani gets pleased with Bindu’s hospitality. Amar tells her that he will drop Mani to the station. He asks her to get ready for dinner. Bindu rejoices and gets ready since its her first dinner date with Amar. She gets selecting her saree and gets confused. She wants to look the best to please Amar.

Samar and Satya have challenged each other. Satya is close to lose the challenge and gets a huge shock. Samar supports Jaya’s sister. He wants to help Richa in getting her love. Richa’s pregnancy disappoints Satya. Satya doesn’t think of anything. Richa tells her that she wants to start fresh with Puneet and have a family. Satya stops reacting on the matter, feeling she has failed as a mother. She locks herself in the room. Jaya and Richa are scared that Satya may take any wrong step.

Samar thinks Satya is doing a drama. Jaya scolds him and asks him if he thinks her mum’s tears are a drama. Samar says she could have cried here, she went from here to bring an impact. He asks Jaya to understand that her mum isn’t so simple. Jaya defends Satya. She feels Satya has reacted normally, she isn’t doing any drama, she is much disturbed.