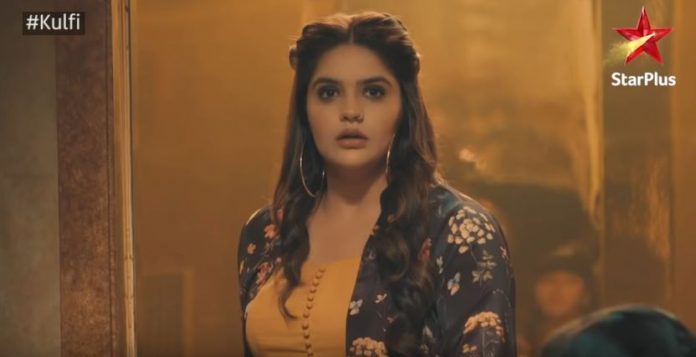 Next in Kulfi Kumar Bajewala: Gunjan and Tony become the new villains in Lovely and Sikandar’s lives. Gunjan can’t stand Lovely and knows Tony has same bitterness for Sikandar. Gunjan feels Lovely is heartless and can never be deserving of Sikandar’s love. Sikandar and Lovely get driven by their suppressed emotions during the play. Lovely wants to come back home and have a normal life with Sikandar. Her ego comes in between. She wants Sikandar to take the first step of reconciliation. Sikandar also wants Lovely and Amyra back. He feels bad that the play just ended and he will be losing his family again. Sikandar wants to stop them some how, and seeks help from Kulfi.

Udaan:
Chakor succeeds to expose Akash with the help of his wife Jyoti. She knows Jyoti doesn’t bear injustice and is a good person at heart. She encourages Jyoti to get rid of her fears and speak out Akash’s truth. Jyoti tells the truth to Tejaswini that Akash is really a criminal, as Chakor is stating. She reveals Akash’s numerous crime and feels ashamed. Tejaswini apologizes to Chakor for not believing her before.

Chakor asks her to help her in finding Imli and saving her. While the entire family rush to the police station to find Imli, they come across Akash. Tejaswini slaps him and Damodar, and also gets them punished by the cops. Tejaswini can’t believe that Akash has blinded her by her pretentious behavior. Chakor gets worried for Imli when she doesn’t see her anywhere. Akash stuns Chakor with a big revelation that he has killed Raghav and Imli, and now Chakor can never get them back.

Krishna Chali London:
Radhe and Krishna express their discomfort and problems arising due to Dr. Veer. Radhe is much upset that Veer is killing their mental peace and happiness. He gets complaining to Sunaina and also threatens of killing Veer if he doesn’t change. Sunaina helps out Radhe in finding Krishna at the college premises. She tells him that Veer is heartbroken by the strike of fate, but he isn’t evil to do wrong with women. She defends her son. Radhe finally gets Krishna and turns relieved.

He calls up home to inform Shukla and family that Krishna is absolutely fine. He was earlier imagining that Veer had kidnapped Krishna. Veer and Sunaina get to see Shukla on the video call and get a huge shock, since their past is also related to Shukla. Veer can’t believe that Shukla is Radhe’s father. Sunaina stops Veer from getting enraged and takes him home. She decides to keep Radhe and Krishna away from Veer.

Rifat plans to snatch Mariam’s property once Mariam marries Fawad. She can’t stand Mariam and her happiness. She wants Madiha and Majaaz to cry for their daughter. Rifat plays evil again. Rifat awaits Mariam and Fawad’s marriage so that she gets the haveli on her side again. Fawad exchanges the garlands with Mariam. They both have the riruals of marriage. Fawad and Mariam get married with the blessings of their families. Rifat employs Chiku into committing a crime. She makes Chiku drop the chandelier on Mariam so that Mariam dies. Fawad senses the danger on Mariam and saves her from the chandelier in the nick of time.

Ishita gets caught up by the goons once again, after she had set herself free by a clever plan to distract them. Ishita fails to escape. This time, she falls in more trouble. Goons inform Parmeet about her attempt to run away. Parmeet doesn’t want Ishita to get back to Raman and form united strength to fight him. He asks the goons to do whatever it takes to keep her away from Bhalla family. He doesn’t want to kill Ishita so soon. He plans to double cross Sudha if needed and just thinks of his own selfish motives. Parmeet is sure that Raman will never find Ishita. Meanwhile, Raman gets a lead about Ishita by the doctor with whom she has left a note for him. Raman learns about Ishita’s whereabouts and informs the police to rescue her.