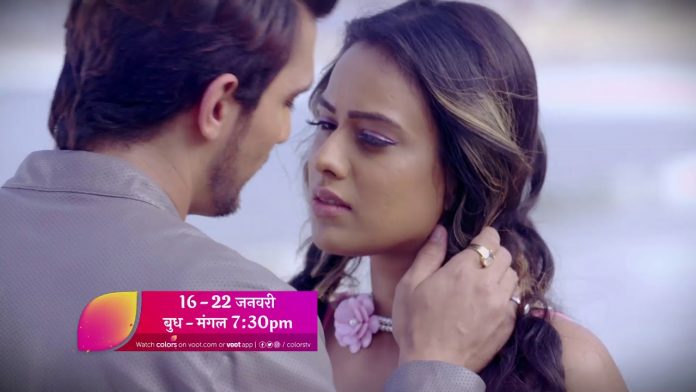 High Five Spoilers Ishq Mein Marjawa: The Goa track will bring two facades of love. The dangerous love of Deep and Aarohi’s tale will get a new twist of mystery with the entry of Mr. X. Deep and Aarohi romance in Goa and celebrate their love, unaware that Mr. X is conspiring against them. Mr. X is Deep’s lookalike. The bigger secrets will be out. The game will get more smarter and complex. Mr. X will also be in love with Aarohi. He knows that Deep loves Aarohi more than his life and decides to take Deep’s life. Mr. X will be playing the same game of love but in his unique style. Mr. X will be more dangerous than Tara. He has the same motive to kill people in love. Mr. X will kill Deep and take his place in Aarohi’s life.

Raja Beta: Purva’s all efforts to search Rahul for their marriage goes in vain. She couldn’t trace Rahul. She gets shattered and cries on the road while riding on her bike. Vedant brings her home. Shanti’s condition worsens seeing Purva’s marriage couldn’t happen. Urmi pacifies Shanti and asks Vedant to do something. She asks him to marry Purva. Vedant fills Purva’s forehead with vermilion and says Purva is his wife and responsibility now and asks Shanti not to worry about her anymore. Shanti and Urmi hug each other happily. Pankhudi has a liking for Vedant and gets shattered seeing his marriage with Purva to save her family’s prestige.

Ramesh gets furious and scolds him for breaking his promise that he will never marry. Vedant tries to make him understand that the marriage was not planned and it happened due to the circumstances, but Ramesh doesn’t agree and tries to throw them out and closes the door. Urmi does Purva’s grah pravesh and takes her inside. Purva asks Vedant to do the last favor on her and give her divorce. She is adamant to search Rahul. She tells Vedant that she can’t live with him. Vedant says he also can’t live with her, but they have to live together for the sake of their Nani and Dadi. Purva is surprised to see how Vedant is treated by Ramesh and others.

Roop reaches the place where Ranvir has kept Ishika captive. Ranvir has planned to kill Roop and hangs him with his head down. Roop asks Ranvir if he thinks he has won over a woman. He says he doesn’t hope this from him and says you think of yourself as a big man, and challenges him to fight with him, and asks if he is scared to lose again and calls him a coward. Ranvir shoots at the rope and makes him fall down. Ranvir and Roop have a fight.

Shakti: Preeto’s brother Sukhwinder/Sukha returns to take revenge from Harak Singh, Veeran and Preeto. Harak Singh goes home and tells Preeto about Sukha’s threat. He gets doubtful about Veeran and recalls Sukha’s words that Veeran was involved with him in the theft. Soumya asks Raavi why she is looking tensed. Raavi hides her fears from Soumya. Harman informs Soumya that he is going out for some work. Harman sees Soumya busy playing with Soham and teasingly complains that he is seeing that she is giving least importance to him since Soham came in their lives. Soumya tells him that since Soham is so young, she is taking extra care of him, but Harman is her life and she can’t share his love with someone else. Harman gets glad seeing her love.

Tujhse Hai Raabta:
Malhar prepares special sweets for Kalyani. She gets into a cute fight with Malhar. He asks her to do some work, before he reminds her. She tells him that she is taking care of baby as well. He asks her to assist him in making sweets. He keeps his ego and tears the recipe paper. He tells her that he will make sweets better than her. She asks him to control his anger, she is just trying to help him. Malhar gets stunned seeing her angry avatar.