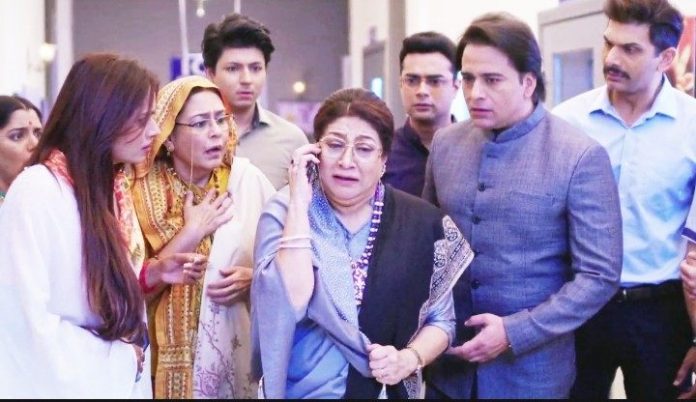 Yeh Rishta Upcoming Huge twists. Naira has become a mother because of Kartik’s big lie. Kartik breaks down within and tries to give happiness to Naira. Naira feels like getting a new life when she takes her baby in her arms. The baby brings happiness in all the sorrowful hearts. Everyone finds a new ray of hope with the baby’s coming. Kartik can’t face anyone because of his lie. He leaves from the ward, and lets Naira talk to the family and share her joy. He has given false hopes and happiness to them. He goes far from them and cries for his lost daughter. Nurse tells him that she has seen his daughter, she was much weak and couldn’t survive, she has passed away. Kartik feels he has lost his little daughter.

Nurse tells him that he has done right to give the baby to Naira, since Kirti is in coma and even Naksh isn’t capable to raise his baby well. She tells him that he hasn’t done anything wrong to give the baby to Naira, who deserved motherhood. Naksh gets the bad news that his baby has left them forever. He cries and gives the shocking news to family. They all break down knowing this. Naksh tells them that he can’t answer Kirti when she comes out of coma. Kartik stays numb and sees his family crying.

The family gives their best wishes to Naira and the baby. They get thanking Naira for giving a lovely heir to Goenkas. Dadi is happy seeing the little bundle of joy who would be completing the family. Goenkas are very happy, while Singhanias are in shock with the bad news of Kirti’s baby loss. Both the families aren’t aware that Kartik has swapped the babies and lied to them about the baby in Naira’s arms. Kartik has chosen a mother for the baby in need, and also chosen a baby for a mother in need. He is happy seeing his nephew. He is broken down with his baby’s loss. He turns Kirti’s baby as Goenkas’ heir. He lies to Naira about their baby. He worries seeing the hospital tag on the baby’s wrist.

He rushes to remove the tag before Naira sees it and understands that the baby is of Kirti. Kartik removes the tag and continues his lie to give a life to both Naira and baby. Naksh rests his head on Kartik’s shoulder and cries for his baby’s loss. Kartik consoles Naksh and feels the pain, since he has lost his own baby.

Kartik suppresses the storm in his heart. The big twist of Kartik’s baby swapping will be hidden from the family for a while. Naira starts living with her baby. She loves the baby a lot. Kirti’s baby brings happiness in everyone’s lives. Goenkas prepare to take Naira and her baby home. They plan a grand welcome for Goenkas heir.

Krishna Chali London: Veer takes a stand for Krishna surprisingly.
Shuklain tortures Krishna. She tells Krishna that she has to sacrifice her hair for the sake of Radhe’s soul peace. Krishna asks Radhe’s family to go ahead with the tortures if they think its justified. Veer comes as a savior for Krishna and stops the bad happenings. He limits Shukla from doing wrong with Krishna. He holds a grudge against Shukla, who is responsible for her mother’s widowhood. Veer doesn’t want Krishna to face the bad tortures of accepting widowhood.

He takes a stand for her. Krishna realizes Veer’s humane side when he becomes her protector and saves her from all the problems. Krishna lands in trouble when some eve teasers get after her, assuming no one will help a widow. Veer comes to her rescue and surprises her.

Raman and Ishita spend good time together overcoming many hurdles. Ishita teaches some dance steps to Pihu, so that Pihu can perform classical dance in the school. She makes the steps easy and asks Pihu to follow. Raman gets happy seeing Ishita dancing. He adores Ishita. He asks Pihu to see how he dances. He tells them that even he dances well. Raman tells Ishita that they deserve to romance, they aren’t too old to leave romancing. He dances with Ishita and shares a moment with her. He is happy that Ishita is with him. He tells her that he can’t afford to lose her, since she is his life.

He confesses love to her. She is also happy to have Raman’s love with her. She tells him that if she is his life, he is also her breath and strength. They ask Pihu whom does she love more. Pihu tells them that she loves both of them. She brings them together. Ishita surprises Raman by her romantic gestures and turns him shy. Sudha will be bringing Yug to Bhalla house and bring twists.