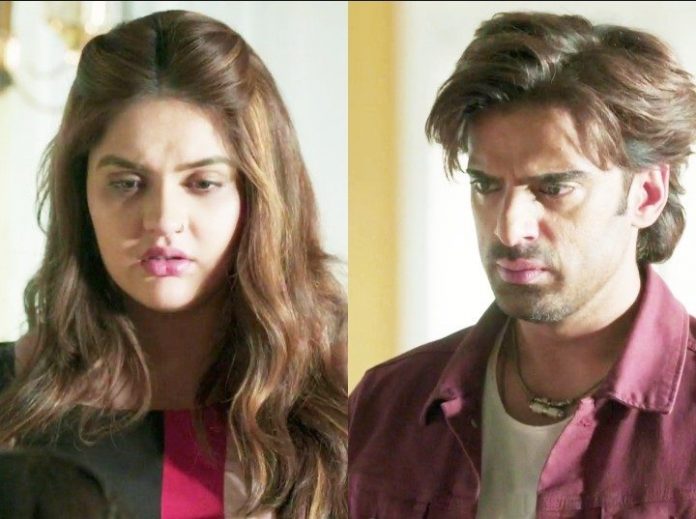 TGI Friday’s Spoilers Kulfi Kumar Bajewala: Sikandar aims to win Kulfi’s forgiveness. He isn’t able to conclude to her that he loves her dearly. Sikandar is much upset over Lovely’s madness. Lovely learns how the family is conspiring against her, and wants Nimrat in Sikandar’s life. She reaches Sikandar’s house to throw out Nimrat. Sikandar and his family oppose Lovely once again. Sikandar wants Lovely out, since she has called off their marriage once again. He reminds her how she left in her ego again. He doesn’t want Nimrat to leave, since Nimrat has become a caring figure for Kulfi.

He wants Kulfi to stay with Nimrat. Lovely gives ultimatum to Sikandar once again. She wants Kulfi and Nimrat out of the house, since she hates both of them. Sikandar realizes the threat on Kulfi and family because of Lovely. He gets too upset. He falls down on the treadmill due to a blackout by stress. Sikandar gets hurt. Kulfi runs to his rescue.

Ishq Mein Marjawa:
Raj and Aarohi return home from Goa. Virat meets Raj and thinks he is Deep. He gets questioning Raj and asks about Abhimanyu’s murder. He suspects Deep. He thinks Deep has murdered Abhimanyu. Everyone gets tricked that Raj is Deep. Raj enjoys fooling the family and living well with Aarohi.

Udaan:
Raghav requests Imli to forget her, since he can never love her. He tells her that he loves Chakor. He apologizes to Imli. Imli does a duty of a sister and unites Chakor with Raghav. She promises Chakor that she will not walk on the wrong path. She gets heartbroken. Raghav gets Chakor home from the hospital. Everyone welcomes her with flowers. Raghav and Chakor have a moment, when Anjor makes them hug. Anjor shows them the medal she has won. She tells them about the Republic day. She asks them why doesn’t they celebrate this day. Raghav and Chakor plan to celebrate the Republic day with everyone. Anjor is happy to see them together. She wanted her parents to end their fight. Imli has changed and accepted Raghav and Chakor’s relation. She sees them and feels for Raghav again.

Sitara:
Sitara and Viraj aren’t aware that they are in love. He gifts her many things to surprise her. He acts as if he has forgotten her birthday so that he gives a big surprise to her. He wants to celebrate Sitara’s birthday in a good way.

Internet Wala Love:
Jai tries a way to convince Aadhya. He expresses his feelings for her. He apologizes to her by showering flowers towards her. He sings a song for her. PK knows about Jai’s true love and is helping him. Jai doesn’t let Aadhya face any anger by Shubhankar. She loses her focus and burns the soup dish. Jai changes the soup in time to save Aadhya. Jai and his friends make plan to win Aadhya’s trust again. Jai becomes filmi hero for Aadhya. He is Aadhya’s lover now and can do anything to get her love. Jai protests and sits outside Aadhya’s house until Shubhankar and Aadhya forgive her. His friends join him and make proper arrangements of stay and food for him. Jai and his friends have a party in the shelter. Jai is sure that Aadhya will soon melt her heart and forget their differences. Shubhankar wants to separate Aadhya and Jai. Jai cares for Aadhya a lot and is ready to bear any problem.

Roop:
There is a new entry in the show. A clumsy guy lands at home. He is Ranvir’s brother Samridh. He has arrived with a big intention. He is negative, and hides his evil by his innocent pretension. He wants revenge from Roop. He is mistaken that Roop and his family are responsible for Ranvir’s death. He hugs Ranvir during his final rites and feels shattered to fulfill the customs. He promises Bua that he will make Roop pay for Ranvir’s death. Samridh is Roop’s new enemy.

Shakti:
Harman and Soumya have lost the battle in the panchayat. They want to fight for Soham. Soumya wants to get Soham’s custody. Varun tells them that Soham is his child. Varun gets his family to get support. Harman and Soumya refuse to give Soham to Varun. Varun tells them that he has started his job and earns money. The panchayat tells Soumya that Varun is able to raise the child and now he will be keeping him. Varun snatches Soham from Soumya. Soumya cries for Soham. She asks Harman to do anything, but get Surbhi’s child back, since Varun doesn’t love Soham, Varun is doing everything for revenge. Harman promises to get their son back.