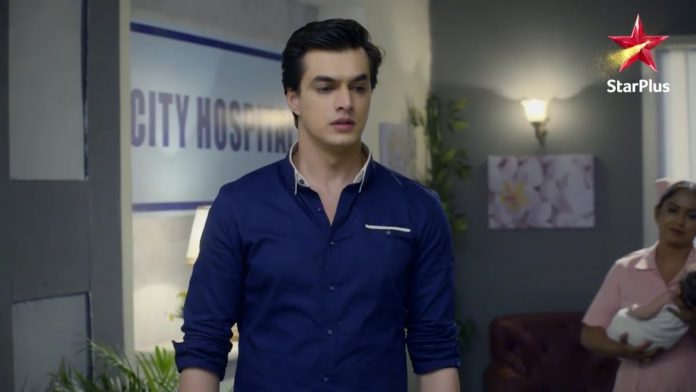 Yeh Rishta Wrapped secret brings twists. Everyone gives their best wishes to Naira, and welcome her home playing the dhol Nagada and showering flowers in her way. Dadi is too happy that Naira has fulfilled her wish and gave a heir to the family, when they thought Naira’s pregnancy was impossible. The family welcomes the baby at the auspicious time. Naira and rest of the family know that Naksh and Kirti’s baby is no more. They all are sad for Naksh and Kirti, who misses their parenthood by reaching close. Naksh doesn’t want Naira to miss out her happiness, being sorrowful for him.

Kartik tells Naira that she should focus on the baby and not take any stress. He asks her to take rest. He lifts Naira and takes her to the room. They take their selfies with the baby and share a moment. The family celebrates the baby’s homecoming. They smile when the baby smiles, and worry when the baby cries.

Everyone gets at baby’s service day and night. Dadi keeps the Chatti puja for the baby. The Goenkas invite Singhanias for the puja. Singhanias express their happiness towards Naira’s baby. Everyone sings and dances, as any normal celebration. Kartik goes to a corner and sheds tears. Naira looks for Kartik and wants to know why is he away from everyone. Kartik sees Naksh loving the baby and feels sad.

The baby gets calm in Naksh’s arms. Kartik knows Naksh and his connection with the baby. He feels even the baby has sensed his father. Dadi takes the baby from Naksh. Kartik is afraid that his lie will be known to the family. Kartik returns to everyone and acts normal. He hugs Naira and lightens his heart. Kartik deals with his dilemmas and sufferings all alone. The big lie will be bringing huge twists, that changes the terms of Singhania and Goenka families.

Also Read, Ishqbaaz: Mannat irritates Shivaansh with her foolish ways. She doesn’t know how to impress him and ends up troubling her. She eats her maggi and drops the bowl, which finally falls on Shivaansh’s head. She apologizes to Shivaansh in her own unique way. She tells Shivaansh that she is deeply sorry since he hates noodles. He finds her weird to think that he is just frustrated over noodles. He asks her have she lost her mind. Shivaansh gets yelling at her, while the entire family bursts into laughter over Mannat’s silly talks and Shivaansh’s cute suffering.

Mannat likes Shivaansh. She is lost in Shivaansh’s charming magic. Shivaansh doesn’t believe her easily. He wants to know if she is really genuine. Shivaansh asks Mannat how did she put the noodles photo on social media. Avi shows the photo and also the comments where people have made fun of Shivaansh. Shivaansh gets enraged and scolds Mannat. He tells Nani that Mannat is not innocent, she is very clever and created this mess with a purpose. Nani tries hard to save Mannat. She finds Mannat a genuine and true person. Shivaansh blames Mannat and asks her if she has put the photo for money.

He asks Mannat not to lie and admit her mistakes. Mannat apologizes to him on seeing the photo. She tells him that she didn’t do anything, she has just hit him with the stone. He realizes that she was the person who has hit him outside the hospital. He reprimands her further. He asks her why did she hit the stone and flee. She tells him that she has hit the stone to divert the crowd so that she could take little girl to the hospital. He hears her reasoning and forgives her. He warns her against doing any mistake again.

Kasautii Zindagii Kay:
Navin returns in Prerna’s life. Navin is all set to create a havoc in Anurag and Prerna’s love story again. With the already existing group of haters and enemies, Anurag and Prerna will be facing obstacles to reach their destination of love. Anurag’s love confession goes in vain, since Prerna doesn’t hear anything and faints down. Anurag tries to get her treated in time.