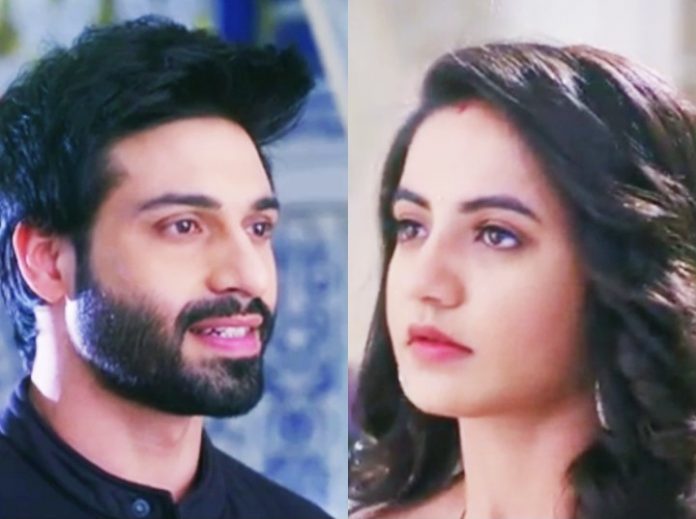 Shakti Ek Thi Rani Udaan and more spoilers. Shakti: Soumya cries and misses Soham. She asks Harman to take her to Maninder’s house. Harman asks her to understand and says they will go to Panchayat tomorrow. Nani calls Soumya and tells her that Soham is crying a lot and Varun couldn’t handle him or make him quiet. Harman and Soumya run to Maninder’s house and see the baby crying. Varun stops her from taking the baby in her hands. Soumya looks at the baby and sings a lullaby. Soham becomes quiet hearing her voice. Varun gets upset. The lady Panch looks at them. Harman, Soumya, and Varun go to Panchayat for their decision.

Ek Thi Rani Ek Tha Ravan: Rivaaj plans to surprise Rani and shower flowers on her when she comes to attend Raghav’s birthday party. He asks someone to make Rani enter the house lastly. Rani and Rukmini come there. Rani asks Rukmini to go seeing the puppy. She steps in the house. Rivaaj presses a button and makes the flowers shower on her. Raghav runs to Rani on seeing her and they sign each other friends. Rivaaj gets angry on Raghav for spoiling his plan. He couldn’t bear Raghav and Rani’s inclination towards each other. Raghav and Rani get bounded by a special bond of friendship.

Rupa gets emotionally blackmailing Jai. She gets admitted in hospital. When Jai meets her, she threatens to commit suicide. She tells him that she can’t accept Aadhya as her Bahu. Jai stops her from injecting herself. He tells her that if she can threaten him, he can threaten her too. He takes the same injection to harm himself. Dada ji stops Jai. Jai tells her that he really loves Aadhya and wants to be with her for the rest of his life. He wants Rupa to understand his decision. He wishes Aadhya to become part of his life.

Udaan: Bhanu tries to kidnap Imli and make her against Chakor and Raghav. When he fails, he targets Anjor. He tells Chakor and Raghav that he has sent a bomb to their house, which Anjor will be unpacking. Raghav loses his cool and bashes up Bhanu, getting fearless of the numerous goons around. Bhanu asks Raghav to beat him more, since he will be failing to save his daughter Anjor. Bhanu is happy that he has won. He asks Chakor to try her best and get Anjor alive. Raghav asks Chakor to call home and inform Tejaswini about the bomb. Raghav and Chakor try to rush away. Chakor begs Bhanu to spare her daughter. Chakor runs to cross the way to her home to save Anjor.

Aapke Aa Jane Se:
Arya gets into a fight with Guddu and comes back home. Guddu has done the fact that he is a taxi driver. Sahil takes Arya’s side and scolds Guddu. Vedika defends Guddu, since he is working hard for earning money. Sahil and Vedika get into an argument. Vedika gets depressed and goes to a temple to pray. She gets labor pains and falls on the stairs. Some women help her. Sahil also reaches the temple and tries to find Vedika. Sahil and Pankti finally find Vedika in the temple and see her state. The women help in Vedika’s delivery. Manjula and Badi Amma also reach there and learn about Vedika’s delivery. They get happy knowing Vedika has delivered a baby boy. Sahil rushes Vedika to the hospital for her care. Vedika is in any state to worry for her life. She is much heartbroken with Sahil’s deceive.