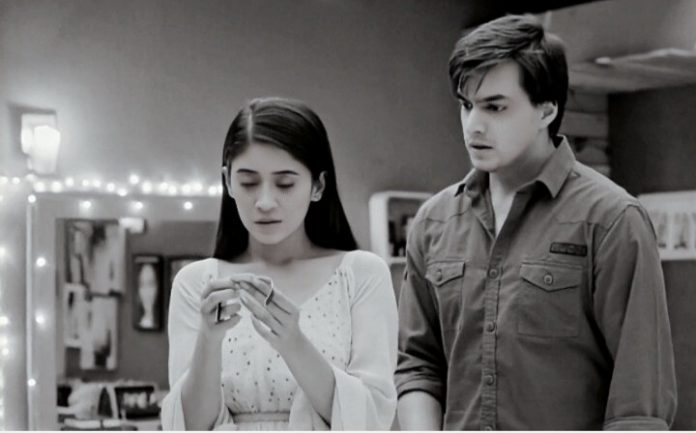 Yeh Rishta High Voltage Drama. Naira has no idea that the baby is of Kirti. She can never imagine this. Still, she questions Kartik about the secret he was just talking about. She asks him what did Leela do, how can she take advantage of them, what’s the big secret that he is afraid of getting revealed. She gets close to know the baby’s truth that it belongs to Naksh and Kirti. Kartik gets close to confessing that he has swapped the baby in the hospital. He was about to blurt out the entire truth that he had given Kirti’s baby to Naira to save Naira’s life and also give a mum to Kirti’s baby. Kartik was blurting everything in guilt. He tells Naira that he has done a mistake.

Leela stops him from saying the truth. She lies to Goenkas again. She asks Kartik to let her say the truth, which will be good for both of them. She tells them about Kartik’s big misunderstanding of losing his child and breaking down. She tells him that Kartik was very happy to know that his child is alive, she has handed him the baby. Leela gets blackmailing Kartik for money.

Kartik lets Leela tell them a fake story, since he has no courage to tell the truth to Naira. He finds Naira getting much love for the baby. He fights with his inner dilemmas and wants to continue the lie. He tells Leela that he will give her money, but his secret shouldn’t come out. He is ready to get blackmailed for the sake of his family’s happiness. He feels like turning selfish. He dreams that Naira has learnt the truth of Kirti’s baby. He imagines that Naira has handed over the baby to Naksh. Kartik can’t bear losing the baby. He gets broken down with the thought of Naksh taking over his baby and leaving. Kartik shouts on Naksh to stop him. He can’t see his baby going away.

Dadi tries to lessen the tensions in the family. She tells them that they will soon have baby’s naming ceremony done. Naira gets excited. Kartik too gets calmed down after the high drama. Naira tries to find the best name for the baby. Kartik tells her that its too early to decide, pandit will give them the alphabet after making kundli. Naira tells him that she has asked Dadi and they can name the baby by their choice.

Kartik and Naira decide to keep the name, which is the same as Kirti decided for her baby. Kartik gets troubled when Naira reminds him Kirti’s words. Kartik recalls the time when Kirti told him the choice of name. He fails to write any name as suggestion. Naira asks him can’t he write anything. She says if we had a daughter, we would have named her Kaira, we will think again since its a baby boy. She tells him that its actually Bua’s work to name baby, Kirti would have made the list of names ready if she was fine. She tells him that she wishes Kirti to recover soon. The baby’s Naamkaran ceremony starts in full swing. Everyone gets excited to name Junior Goenka.

Kirti is brought home since she is showing signs of recovery. Doctor suggests the family to look after Kirti well at home and maybe she will come out of coma if she is surrounded by her family members. Kartik and Naira take the baby to Kirti and make him take Kirti’s blessings. Kartik turns emotional and feels burdened by guilt.

Krishna Chali London:
Krishna gets worried when Veer insults Shukla. She helps Shukla by answering the investor’s questions. Veer finds Shukla and Krishna united and gets angered on her for pretending good towards him. He targets Krishna next. He tries to break Shukla and Krishna’s unity. He tells the people about Shukla’s illiteracy and also the facts shared by Krishna.

Veer puts the entire blame on Krishna that she has revealed the dark secrets of Shukla family to him. Shukla and his family get angered on Krishna. They ask Krishna to stay at her dad’s house, since they will not be accepting her back in the family. Krishna gets badly framed. She tells Shukla that she didn’t inform anything to Veer. She tries to defend herself, but in vain. Shukla doesn’t listen and drops Krishna on the roads. Veer gets pleasure seeing Krishna’s plight.

Ishqbaaz:
Shivaansh gets dizzy during the celebrations of Shivani’s Shagun ceremony. Varun takes advantage of Shivaansh’s illness and snatches the keys from him. Shivaansh loses the locker keys. When he finds the person picking the keys, he sights Mannat around. He gets angry on her, while Varun happily goes to open the safe. Varun is the masked bride in disguise. Varun gets the locker keys and doesn’t find anything inside. He gets a huge shock on finding the safe empty. He wonders who has stolen the jewellery, cash and will papers from the locker. He wants to get Shivaansh’s will. He is happy to know that Shivaansh has named all his property to his favorite sister Radhika. He has married Radhika just for the sake of her property. Varun wants to get his hands on the will papers, so that he can know the legalities and snatch the property.