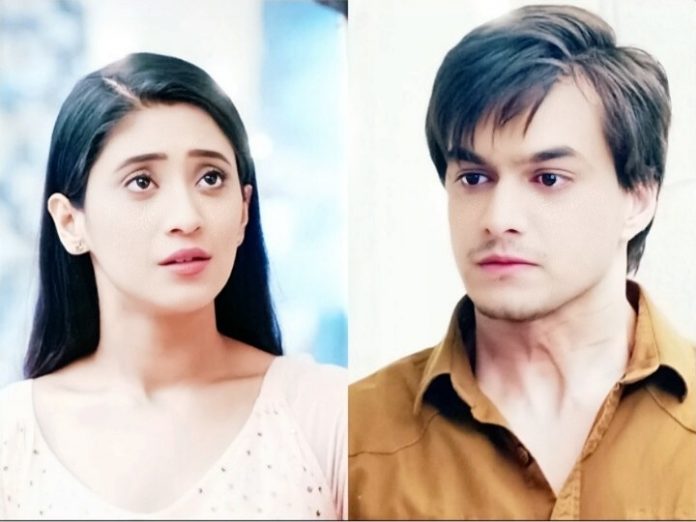 Yeh Rishta Upcoming Shocking drama. Singhanias and Goenkas dance in Kaira’s baby’s Naamkaran. The family celebrates happily. Manish wants the best name for Junior Goenka. He tells them that Kartik’s son has completed the family and now all his worries have gone, he is sure that the heir will take charge and set everything fine for them. Everyone sings their Shagun songs and congratulate Kartik and Naira. The proud parents get seated while everyone give their wishes and blessings to the child. The women can’t stop expressing their happiness. They have an open competition to give their suggestions for the baby’s names.

Everyone mentions their suggestions on the banners, photo frame and silver plates. Everyone wants to know what name will Kartik and Naira choose. Kartik reminisces the old time and considers Kirti’s choice. He writes Krish with the red color on the plate and shows everyone about the name. They get happiness and name the baby Krish. Naksh gets happy with the name, since he knows the backstory. Naksh goes to share his happiness with Kirti. He tells her that Kartik and Naira have named the baby Krish as per her choice.

He gets praising the cute baby and asks her to come back to them at least to meet her nephew. Kirti opens her eyes and wakes up for the sake of her son. Naksh gets surprised seeing the big improvement in her. He rushes to inform the family that Kirti has woke up from coma. The family gets a huge surprise with this and rush upstairs to see Kirti. Naira tells Kartik that their son is lucky for Kirti as well.

Kartik feels worried since his lie would be coming out. He thinks of his promise to return the baby to Kirti when she recovers. He can’t snatch Kirti’s happiness for Naira. He wonders how will Naira react on learning the big truth. Kirti is aware of the truth that Krish is her son, since Kartik has told her the truth while she was in coma state. She has heard Kartik and his sorrowful decision. Kirti will be claiming her child back from Kartik and Naira. This will be bringing a major twist in Goenka and Singhania family.

Shivaansh realizes his feelings for Mannat during Shivani and Angad’s pre-marriage functions. Mannat starts entering Shivaansh’s heart by her innocence. He finds her very hardworking, though she makes few mistakes.

Shivaansh feels Nani is right about Mannat, she is genuinely a nice girl. On the other hand, Shivaansh is no idea about ACP Aditi, who is working along Varun against the Oberois. Aditi succeeds to cheat Shivaansh. The family celebrates happiness. Nani misses Dadi in the functions. Shivaansh and Dhruv make Shivani and Angad wear the floral chunri.

Mannat gets scolded by Shivaansh for another mistake. Mannat keeps a check on the safe. She informs Shivaansh that the safe is missing. Shivaansh gets a shock and hurries to see the safe. He finds the safe intact and scolds Mannat. He asks her to let the function happen with peace. Shivaansh holds her hand and gets into a moment with her. Angad’s Bua tries to break the marriage. She confronts Shivaansh and asks him what is he hiding about his illness, is he severely ill. He tells her that he just have an allergy with smoke. He shows her the medicines and prescription. He falls her plans. She wants to know his health issues. She thinks he is very clever and misleading her with evidence. Bua knows he was well prepared. She doesn’t want to lose and find out his disease.