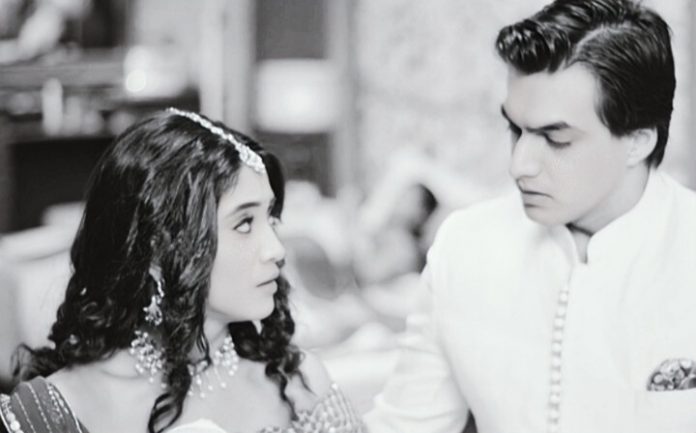 YRKKH Kartik shocks Naira. Kartik manages to get the baby’s medical file so that he can avoid the vaccination for the baby. Naira looks for her bag. She wants to know where did the file go. Leela has stolen the file in time. Kartik feels guilty because of the increasing number of lies. The doctor tells Naira that he can’t administer the medicines to the baby without the medical file. Naira feels irresponsible and apologizes to Kartik. He gets emotionally down when Naira blames herself. Naira tells the family that she has a hope that Kirti will get fine soon. The family wishes that a miracle happens and Naira’s words get true.

Naksh tells Kirti about the baby’s naming ceremony. Everyone makes prayers for the baby and be a part of the puja. They make great wishes for the baby. The baby’s voice reaches Kirti and brings a sensation in her mind. Kirti gets to hear everyone’s wishes for her son. Naksh too blesses the baby, unaware that he is the father. Kartik also makes a lovely wish for the baby, that he gets all the deserved happiness. Kirti gets to hear about the family’s discussion regarding the Naamkaran.

She gets triggered by the intriguing celebrations at home. She also wants to suggest the name to the baby. Everyone competes and shows their choices of names to Kartik and Naira. The Naamkaran becomes a battle field between Dadi and Rukmani. Goenkas and Singhanias sing and dance, fulfilling the rituals when Kartik and Naira name the baby Krish. Everyone gets happy with Kartik’s choice. Kartik surprises Kirti by naming the baby Krish. Naira feels she didn’t choose this name and gets surprised with Kartik’s choice. She had chosen something else. She wants to ask him why did he keep the name which Kirti had selected for her son. She supports Kartik in his decision. The baby gets the name Krish. This news reaches Kirti and she wakes up from coma.

Falguni and Niyati learn that Uttara Devi has gone missing from the house. Uttara plans her re-entry in the house by targeting the weak link Jayant. She knows he would easily melt his heart and forgive her. She comes across Jayant and gains his sympathy by her mental imbalance drama. Uttara thinks of ruling over everyone once again by using Jayant. Jayant feels sorry that he didn’t attend Uttara during all these years. He feels guilty and tries to be good towards her.

Jayant feels sense of responsibility towards her and wants to take her home. He gets Uttara home much to Suyash’s shock. Suyash wants Uttara Devi out of the family, knowing she will ruin them once again. Uttara gets Jayant’s support and stays back in the house. Meanwhile, Falguni finds Chamki and gets police to catch her. She demands Chamki to tell her about Laddoo. Chamki’s husband doesn’t want her to tell the truth. He shoots her down and runs away. Police tries to catch Devraj. Chamki realizes how Devraj cheated her and tells the truth to Falguni about finding Laddoo inside an ambulance. Falguni realizes that Laddoo is her long lost son Govind. She gets emotional knowing that her son is alive. She can’t express her happiness on this news. Falguni rushes to share the good news with Suyash. She tells him that their son is alive, and that’s Laddoo who has made a special place in their heart. Uttara joins hands with Abhishek and plans Suyash’s murder. She doesn’t want Suyash and Falguni to unite at any cost.