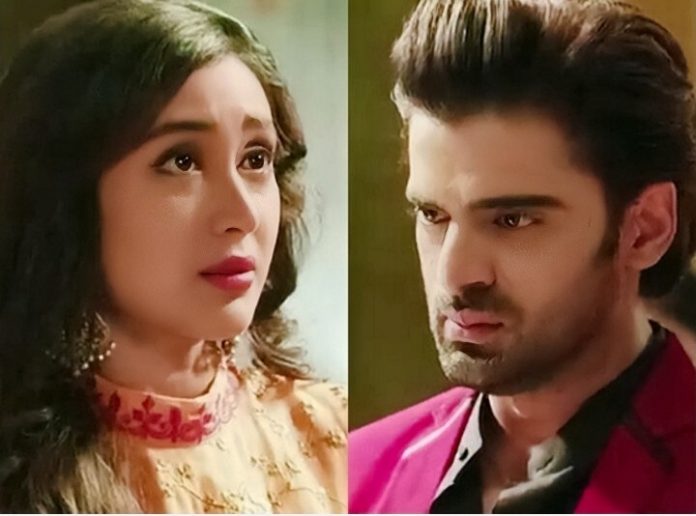 Kulfi Kumar Bajewala Namrata plays safe and warns Kulfi. Lovely tells Amyra that they will make Kulfi execute their plan so that Nimrat gets out of Sikandar’s life. She tells Amyra that they will get Sikandar back after taking a big step. She wants Kulfi out of their lives. She shares her plans with Amyra. Amyra is ready to do anything for getting her happy family back. Sikandar and Kulfi sing a song and practice. Kulfi sounds clever to Nimrat. She taunts Nimrat while singing the song. Sikandar enjoys Kulfi’s song and finds her very talented. Nimrat aka Namrata gets troubled by her ex-boyfriend. Kulfi tries to keep an eye on Nimrat. She makes excuse and follows Nimrat. She tries to get information about Nimrat’s background. She overhears Nimrat’s talks and informs Amyra about it.

She tells Amyra that Nimrat is going out to meet someone. Amyra asks her to go after her in a boy’s disguise. Kulfi loves the idea. She goes after Nimrat to find clues about her fake identity.

Nimrat feels someone is following her. She doesn’t realize that its Kulfi. Kulfi sees Nimrat and Satya meeting. He begs her not to ruin Sikandar’s life. Nimrat warns him against calling her again. She angrily leaves from the cafe. Kulfi meets Satya and tells him that she wants to save Sikandar from evil Namrata. She asks him to help her in saving Sikandar. Satya tells him how Namrata has got him arrested for a false blame. He tells Kulfi that Namrata is totally mad. He asks her to save Sikandar by revealing Namrata’s truth. Kulfi seeks his help and tells him that Sikandar will believe him if he reveals the truth. She gives him the address of Sikandar’s house. Satya is employed by Lovely. Lovely wants Kulfi to expose Nimrat. Satya meets Sikandar to reveal about Nimrat. He speaks the truth of Namrata.

Nimrat gets worried on seeing her truth coming out. Satya asks him not to marry Nimrat else he will regret all his life. Sikandar doesn’t believe him and wants him out of the house. Kulfi and Satya fail to expose Nimrat. Nimrat gets glad and recalls how she has lied to Sikandar before about Satya. She has convinced Sikandar about her lies. Sikandar leaves Satya with a warning.

Nimrat warns Kulfi against her plans. She shows her true colours to Kulfi. Nimrat accepts her crime of cheating Satya and Sikandar. She wants to marry Sikandar at any cost. Kulfi records her confession. Amyra tells Nimrat that now this video will be exposing her. Nimrat tries to snatch the phone from them. She deletes the video from the phone. Amyra tells Nimrat that she has already sent the video to Sikandar. Amyra and Kulfi tell Nimrat that she won’t be able to trick Sikandar now. Nimrat hurts herself and fools Sikandar. She gets his phone and deletes the video proof. Amyra and Kulfi get to see Nimrat’s madness.

Nimrat tells them that she can hurt them for her aim. Amyra and Kulfi don’t get scared of her and unite to expose Nimrat. Sikandar and Nimrat’s engagement twist will be seen. Nimrat plans to propose Sikandar.