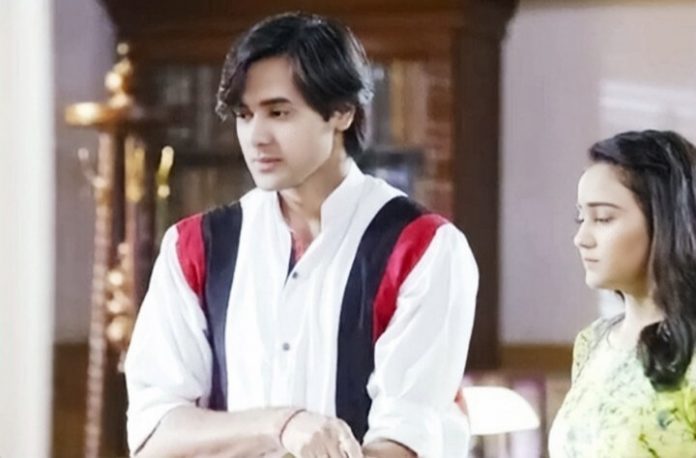 Spoilers for Yeh Un Dinon Jiji Maa Shakti and more. Yeh Un Dinon Ki Baat Hai: Naina and Sameer get close to get married. The haldi ceremony is celebrated. Naina looks pretty in a yellow suit. She receives compliments from her friends and family. Naina is very happy and gets the shagun haldi applied to her. Bua ji applies haldi to Naina and asks everyone to follow the rituals like her. Preeti takes Naina and Bela for dance. They have a dance happily. Anand and Bela are keeping all the duties of parents.

They share some problems with Bua ji. Naina overhears the troubles caused by Rakesh. She gets upset and wishes that Rakesh comes to attend her marriage. She wants her father’s blessings. Rakesh stays away from the marriage functions. Anand knows that Rakesh’s absence is affecting Naina’s happiness. He assures Bela that he will try to convince Rakesh and get him soon.

Aapke Aa Jane Se:
Vedika gets troubled by the media who questions her about attempting to kill Pankti. Vedika tells them that she is innocent, its a trap laid by Pankti’s mum. Inspector scolds Vedika for her drama. Vedika is facing new difficulties. The reporters taunt Vedika for not having any answers. Vedika tries to defend the blames. Arya meets Vedika and tells her that Sahil will free her from jail. Sahil and Arya try to get Vedika released. Meanwhile, Puneesh makes a return. He meets his wife and tells her that he has changed completely. He wins her trust and asks her to help him get the bail. His wife gets convinced by his crocodile tears. Puneesh will create a new trouble for Sahil and Vedika.

Jiji Maa:
Niyati prays for getting Laddoo back. She wants to find Laddoo and surprise Falguni. Falguni and Vidhaan try to find kidnapped Laddoo. They realize that even Niyati has gone missing. Niyati meets Laddoo at the godown by finding out Devraj’s details. Niyati feels the unexpected thing happening when she fails to find Laddoo and also gets captive like him. Laddoo feels hungry and tells Niyati that he isn’t hungry, he tricks his mind like he has eaten the food and stays happy. Niyati tells him that Suyash and Falguni are his parents. This brings happiness for him.

He tells her that he understands it now that they got separated because of losing him and now he will unite them. He promises to unite his parents. Devraj wants to deal with Falguni. Falguni and Vidhaan take police help and reach the place with police. They miss out to find Niyati and Laddoo. Inspector tells them that they will surely find Laddoo. Falguni wants the police to find her sister and son. Vidhaan is hopeful that Niyati has taken Laddoo with her and escaped. Niyati wants to save Laddoo from Devraj. She hopes that Falguni finds them soon.

Shakti:
Soumya requests Varun to let her meet Soham once. Varun doesn’t listen to her. He misbehaves with Maninder and ousts him from house. Soumya finishes her work at Varun’s house and comes home. Harman promises her that he will get Soham back. He finds her much tired and feels sorry for her. He feeds her the food by his hands. He tells her that he will share her work at Varun’s house. He is ready to do anything to get Soham back. Soumya is crying to get her son. Preeto understands her pain well since she has longed for Harman as well. Soumya wants Soham to get fine. She tells the family that they have to find a way to get Soham back from Varun. She feels she is losing all her hopes. She feels helpless.

Ishq Mein Marjawa:
Tara kidnaps Aarohi. Deep comes to Aarohi’s rescue. Deep stops Tara’s madness. Tara is about to kill Aarohi, but Deep intervenes. Deep and Tara have a fight. He doesn’t know the person hidden by the veil. He isn’t aware of Vasundara’s evil truth. Vasundara saves her truth from coming out. Tara misleads Deep and sends Aarohi with her gang. Aarohi gets tied up. She tries to shout for help. Tara takes a knife to stab Aarohi. Deep is always there to save her. He shoots at Tara. Tara’s goons attack Deep. He fights with them. Tara runs away from there. Deep hugs Aarohi and frees her. Tara fails to kill Aarohi.

Kundali Bhagya: Preeta decides not to let Karan marry Monisha knowing her true intentions and thinks she can do anything for him. She calls Karan. Karan tells her that he curses her to marry Prithvi and then when you marry, I will happily say that marriage is happening. Preeta says I will marry Prithvi only. Karan asks her to leave Prithvi and choose him.

Ek Thi Rani Ek Tha Ravan: Rivaaj comes in front of Rani as his obsessive lover. Rani gets shocked when he comes in front of her and presents himself in a scary way. He tells her that he wants to get her. Rani slaps him. Rivaaj gets angry. Rani suspects Rivaaj’s hand in killing Anjali.

Internet Wala Love: Jai comes to help Aadhya to make Bhujiya at his house. Rupa calls the Food Inspector, The Chef, and NGO lady to taste the Bhujiya and approve their new flavor. She has asked Aadhya to create a new flavor of Bhujiya. The Food Inspector tells that they are getting late and will go. Rupa asks them to wait for a few mins and goes to check Aadhya. She goes to the kitchen and sees Aadhya ready with the Bhujiya. Shubhankar calls Jai and thinks if he went to meet Aadhya.