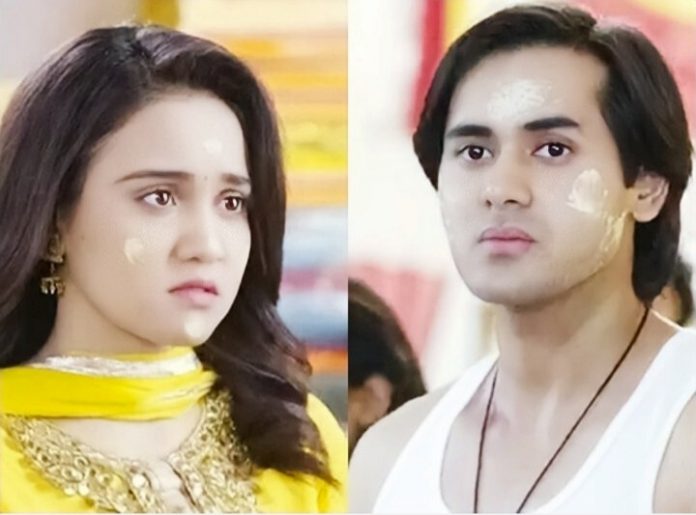 Spoilers Yeh Un Dinon Ishqbaaz: Shivaansh and Sonya’s haldi rasam goes on. His family is very happy for him. Mannat wants to alert him about the upcoming danger. She tries to sign him some how, but gets trapped by Varun. Mannat is helpless because of Varun. She sheds tears while fulfilling the haldi rasam with Shivaansh. Varun fails Mannat’s plans to inform Shivaansh. Shivaansh and Mannat share the haldi and have a magical moment. Shivani and Radhika get the shagun for Shivaansh, and tell him that Omkara and Rudra had sent it from London. Shivaansh gets delighted to see the gifts from his uncles. They already become the part of the Rituals together. Destiny brings them together. The family doesn’t know that the henna artist is Mannat. Shivaansh will be marrying Mannat.

Ishq SubhanAllah: Kabeer and Arez get into an argument. Kabeer wants to secure Elena from Arez or any other wrong guy. He feels maybe Arez isn’t worthy of her. He wants to get Elena marry at the right age, when she is ready mentally. Kabeer is upset with Elena’s decision. Kabeer gets angry on Arez. Arez tells them that he has come home to drop Elena, so that he doesn’t let her face Kabeer’s wrath alone. Shahbaz tells Arez that they have given him a chance to speak, since he has helped them before.

Sameer and Naina’s Sangeet ceremony goes on well. Anand gives a heart melting rendition makes Naina emotional. Anand tells them how much Naina matters to him. He blesses Naina all the best in her life. Anand and Bela hug Naina. Post the Sangeet, the family falls in trouble when the heavy rains occurs and ruins their plans. The rains and troubling roof leakages disturb everyone. Everyone wakes up from sleep when the rain drops on them from the leaking roof. Naina’s marriage gets another problem. Her family rushes and shifts their luggage to some safe place. Sameer’s family gets taunting them once again. Meanwhile, Sameer and Naina share the moment of romance by having their first kiss. They share the special moment before their marriage. Sameer wants to take Naina on a romantic date. The rains will be highlighting the fun on their date. Their rain romance will be seen.

Vedika and Sahil get together for the sake of baby’s Naamkaran. They conduct the puja and pray for the baby’s long life. Sahil plans the puja so that he gets a chance to convince Vedika. Everyone is happy with the new born baby’s coming into the family. Sahil wants to keep the baby with him. Vedika is unwillingly staying with Sahil for the baby’s sake. Vedika tells Sahil that he can’t force her to forgive him. Sahil asks her for a dance. He tries hard to clear her misunderstandings. They have a romantic performance. They have a cute moment by sharing an eyelock. Sahil wants to end her doubts, so that they can stay happily ever after.

Roop and Ishika’s dream shatter because of Samru. Shamsher gets the road roller to break Roop’s cafe. Roop shows the legal documents to the officer and asks him to stop the destruction. Shamsher doesn’t listen to Kamla or Ishika. He asks the officer to leave the documents and just do what he told him. He wants to break Roop’s dreams so that Roop follows the right path towards fulfilling his father’s dream. He wants Roop to get serious about his career and become a police cop.