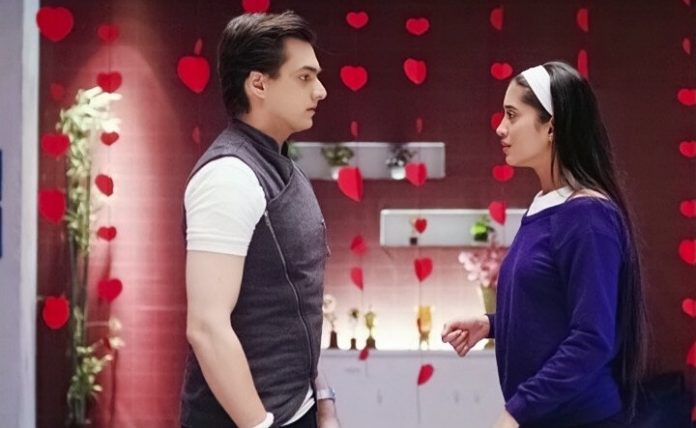 Yeh Rishta Naira Desperate for Kartik. Naira falls in love with Sid. She is lost in his thoughts. She finds some positivity in her life because of Sid. She wishes to meet him. She selects a dress to wear. She gets decked up and wants to look pretty, so that she can impress Sid. She waits for the time when she will be meeting him in the dance class. Since she has lost her memory, Kartik is trying to remind her the past. Naira meets him once again. He drops his wallet unknowingly. She picks it and is about to see his name Kartik Goenka on it. He gets worried about the identity truth coming out. He fakes an identity of Sid to get close to her. He snatches the wallet from her.

She asks him why did he snatch the wallet, like she was stealing it. She says I was just trying to help, why did you react like you are hiding something, like your name is not Sid, but something else. She asks him the truth. Kartik manages the matter by showing his clown pictures. She laughs seeing his pictures and asks who keeps such pictures in wallet. He says anyone would laugh seeing my funny pictures, that’s why I snatched the wallet, tell me did I do anything wrong. She says you have done right.

She becomes his friend when he offers a hand of friendship. She tells him that he is looking cute even in joker pictures. She asks him why did he not turn when everyone was calling him. He tells her that he had ear plugs on. She apologizes for doubting on him. Naira thinks to take his contact number. She goes home and starts missing him a lot. She feels she is stupid and didn’t take his number. She says I could have made any excuse to get his number, I didn’t get this in mind, I wasted time in questioning him, I should have done this big work and made excuse of seeking help from him. She gets angry on herself. She doesn’t know what to do. She gets an idea to call on Sid’s landline number, so that no one doubts on her.

She calls Goenka house and asks for Sid. She lies that she is talking from bank. Manish answers her call. Manish tells her that Sid doesn’t live with them. Naira asks him if he is mistaken, the same number is given in bank records. Manish asks her if she is joking. He doesn’t recognize her. She fails to talk to Sid. She wants to know about Sid’s number, so that she can talk to him whenever she misses him. Kartik enters her heart forever.

Ishqbaaz: Shivaansh misbehaves with his family. He does another drama and ends up hurting Dhruv. He shakes the family’s belief in him. He breaks their heart by their rudeness. He throws out Mannat from the house as well. He vents anger on Nani and tells her that he doesn’t want to talk to them. He asks them not to question him about Mannat. Nani wants to know why did he oust Mannat. Everyone asks him why is he behaving so badly with them. They find this very weird. They want to get their answers. Shivaansh expresses his dislike towards his siblings. He tells them that he can’t do the love drama towards them now, he doesn’t love them and this is the truth. They get heartbroken. Shivaansh tells Nani that Mannat will never return to their house. Nani gets hurt by his actions. They all love Shivaansh and tolerate his bad behavior silently.