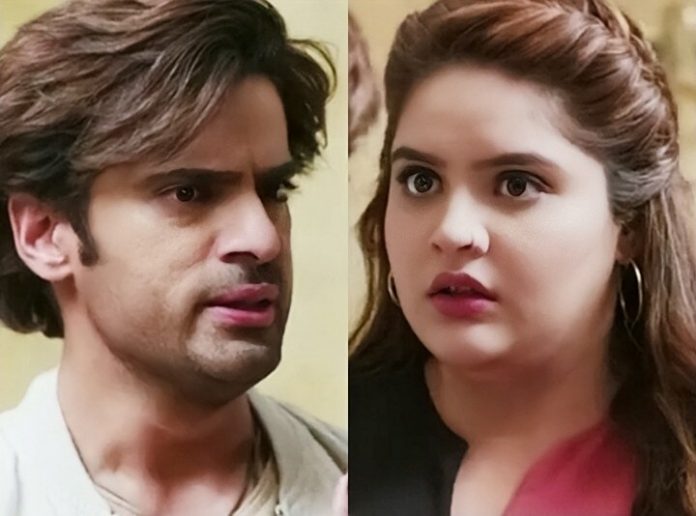 Kulfi Kumar Bajewala Ishqbaaz and more. Sikandar wants to find Kulfi at any cost. He searches for some clue in Lovely’s purse. He yells at her. He doesn’t get any clue. He feels helpless. He thinks of his bad fate since he married Lovely. He can’t do anything against Lovely because of Amyra. Lovely has written Kulfi’s bad fate. She is jealous of Sikandar and Kulfi’s bond. Sikandar wants Kulfi’s address. Lovelu refuses to reveal anything. She tests his patience again. She asks him does he not care for Amyra who is sick. She doesn’t want him to think of Kulfi. He warns her to think and talk, and not break the level of tolerance. He is much angry on her. He doesn’t want to forgive Lovely. Sikandar is worried for Amyra’s condition. Lovely gets punished for her sins when Amyra gets critical.

Happy gets a big opportunity to shift to Chandigarh and start a new life. Happy recalls the troubles of Khosla family. She thinks how Chintu has shown faith in her and married her to solve the problems of her family. She also wants to solve the problem of Chintu’s family by fulfilling his dreams. She tells her family that she doesn’t want to do any job, but rather start the hotel business with Rocky. Happy changes her mind and convinces her family to support her. She wants to fulfill the responsibilities. She finds her happiness in the happiness of others. Sandhya and Smiley support Happy’s decision. They just care for Happy’s good future.

Ishqbaaz:
Mannat gets some luggage home. Shivaansh hides in the huge box and makes an entry in his house. He wants to check Radhika’s room to get clues against Varun. Mannat helps Shivaansh in hiding from everyone. She doesn’t let Nani catch Shivaansh. Shivaansh wants an evidence to prove Radhika’s innocence. He gets Varun’s tab and checks it. He gets Mannat’s number fed in it. Mannat tells Shivaansh that Varun is the blackmailer who had put her in this unwanted marriage. Shivaansh wants to know what was Varun planning, why did he blackmail her. She tells him that she just knew the blackmailer is part of his family. He tells her that Varun gave the idea of fake marriage, which means he has some hidden agenda between this.

She tells him that Munni’s life was in danger, so she was helpless to marry him. She tells how much she tried to inform him the truth. She also realizes that Varun wanted to kill Shivaansh, since he asked her to change the medicines. She tells that she didn’t change his medicines and always tricked the blackmailer. He asks her when did these things start. He tells her that Varun had leaked his illness news to the media by using the medical file stolen by her. Shivaansh wants to know who is involved with Varun.