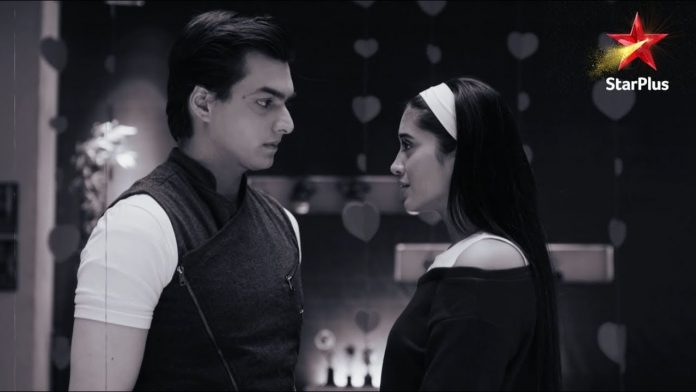 YRKKH Anniversary Celebrations Naksh worries for Naira’s future and well-being. Dadi tells Manish that Naksh can’t dominate and decide for Kartik and Naira’s relation. Naksh barges into Goenka house to complain about Kartik. He realizes that Kartik is trying to meet Naira. He doesn’t want Kartik to remind Naira about their marriage, so that she doesn’t recall his big cheat. He feels Kartik is responsible for Naira’s sorrow. He tells Dadi that he has no interest in keeping terms with Kartik or Goenkas. He ends all ties with Goenkas. He asks Kirti to keep her relations with the family, but not keep any hope from her. Goenkas get troubled by Naksh’s anger. They find Naksh doing injustice with Kartik and Naira. Naira gets dizzy at the dance class, while Kartik tries to handle her.

They both have a sweet moment. Kartik takes her to the car to take her to the hospital. He gets tensed that she is taking mental pressure. Naira tells him that maybe her sugar level got low. She asks him to get anything sugary so that she can eat it.

Kartik checks the back seat and finds the anniversary cake which he had ordered. He drives the car, and asks her to cut the cake to have some. Kartik and Naira together cut the cake. He feeds her the cake and tells her that she will be fine soon. Kartik gets happy to celebrate his anniversary with her. He gives her a lovely bouquet and tells her that the roses will cheer her mood. Naira doesn’t remember the special day. Kartik makes the day more special. The flowers shower on their car. Kartik and Naira come closer once again. She asks him about the anniversary cake. He makes an excuse, since he doesn’t want her to get stressed. Kartik and Naira share some good time, while she is not aware that its her anniversary and she is with her loving husband. Kartik feels fortunate to steal some moments with her, away from her family.

Shivaansh nabs Varun and exposes him in front of Radhika and family. He thanks Nandini for believing him and giving him a chance to prove his innocence.

He tells police that Varun is alive, he has just faked his death and now he isn’t going to get spared. He gets Varun arrested. He doesn’t want to give any chance to Varun. Varun pleads innocence and tries to fool Radhika. Shivaansh tells Radhika that Varun has cheated everyone. He tells Shivaansh that Varun has induced Nani’s heart attack, and also blackmailed Mannat for carrying out his evil. Nani and Radhika hug Shivaansh, and try to apologize to him, since they had doubted on him. Everyone gets happy to have Shivaansh back. Mannat supports Shivaansh. Sahil feels proud of Shivaansh and tells him that he has proved that he is Shivay’s son. Sahil’s evil face will be soon exposed. Shivaansh and Mannat will be finding Varun’s partner in crime, and expose Sahil. The show is going to go off air very soon. Shivaansh and Mannat will be uniting soon.