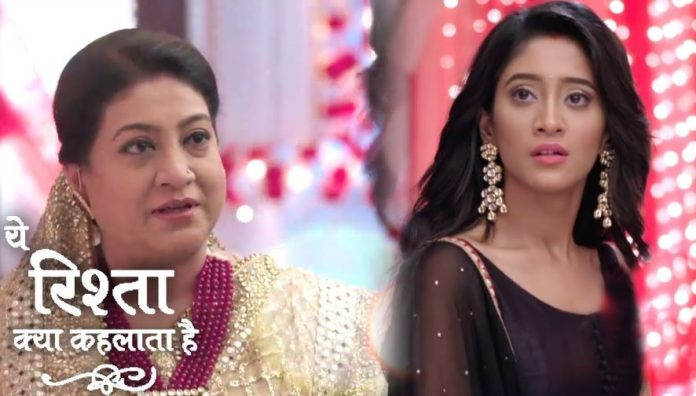 Yeh Rishta Dadi Major Revelation. Naira feels she has sighted Sid with Naksh. She gets confused. Dadi gets too stressed about Kartik and Naira. She wants to perform a puja for them. She refuses to have food or medicines. Manish fears that she may fall ill by being so stubborn. Kartik rushes in anger, and comes across Naira, who asks him to become her dance partner. She fails to convince him. He apologizes and refuses to her. She gets puzzled by his rejection. She tells him that she will accept his rejection, since she has a better dance partner for her. She tells him about her friend Rishabh, who is surely better than him. He fails to explain her the things. He feels Naksh has complicated everything. He wishes Naira understands his heart, which just longs for her. Kartik fails to reach her to clarify.

He feels he has fallen in the dilemma once again, since its tough for him to reject her request. Rishabh is happy that Naira has given a chance to him for being her dance partner. Naksh encourages Rishabh and asks him to have faith in his talents. Rishabh wants to clear his dilemma about Naira.

He gets some advice from his dad and thinks of having a relation with Naira. He has good intentions and thinks this is all that matters. His dad also supports him in his love journey. His dad asks him not to give up on his life. Rishabh wants to put his sincere efforts in convincing Naira. Rishabh challenges Naira for a dance. They both share a moment while they dance. Meanwhile, Kartik sits cherishing his old memories with Naira. Naira gets disturbed by Sid’s memories. She wants to know why is her heart getting inclined to Sid. Rishabh worries for Naira. She wants to be clear in her mind that she has to dance with Rishabh. He tells her that he will be the best dance partner for her.

Dadi decides to pray in the temple for Kartik and Naira. Manish gets fed up of dealing with the exaggerating situation. He warns Kartik against meeting the Singhanias. He doesn’t want any other drama. Kartik tells Manish that he doesn’t want to complicate the situation for them. He agrees to Manish’s request.

He selects the other temple so that he can avoid Singhanias, but fate brings Goenkas and Singhanias face to face once again. Dadi gets emotional on seeing Naira and wishes to tell her the entire truth of Kartik and her marriage. Naira makes an apology to Dadi. Manish stops Dadi from revealing the truth to Naira. Naksh wants Naira to be away from Goenkas. Goenkas are in dilemma over hiding the matter, since Kartik is not around.

Dadi wants the situation to get in control. Naira fails to understand the problem between Goenkas and Naksh. Kartik gets clear of his confusion that Naira will be just of him, since she is his love, wife and responsibility. He doesn’t want to cheat Naira and family. He can do anything for her happiness and well being. He wants to become Shiv for Naira to keep her wish. Kartik and Naira’s Shiv Parvati avatar stuns Naksh the most. Dadi wishes that KArtik and Naira reunite on the eve of Shivratri. Will Dadi’s wish turn true? Keep reading.