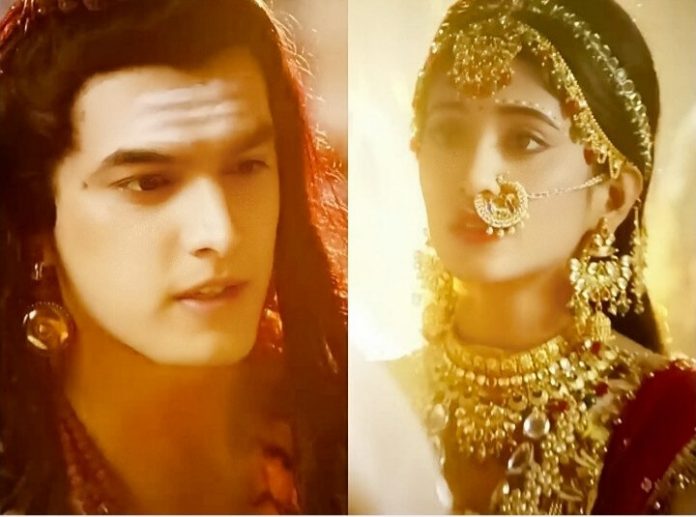 Yeh Rishta Stormy Disaster strikes. Kartik decides to lock up Rishabh in the green room and take his place on the stage to keep up Naira’s wish of seeing him as Sid. Rishabh doesn’t get doubtful. Naira gets ready for the program. Kartik doesn’t get entry at first and manages to get through. Naira feels sad thinking Sid has no interest in her. She stays occupied with Sid’s thoughts. She doesn’t know why is she thinking about him so much as if she knows him since years. Kartik gets ready as Shiv, while Naira performs on the stage, waiting for her Shiv. Goenkas miss out Kartik and recall the last time they have seen Kartik and Naira performing together. Naira wins appraisal for her amazing dance performance. Kartik joins her on the stage. Naira gets amazed to meet Sid again. She thanks him for coming. He tells her that he had to come on her call.

Goenkas and Singhanias witness their magical love once again, unaware that Kartik is dancing with her. They assume that Rishabh is performing with Naira. Rishabh tries hard to get out of the locked room. He wonders what will Naira do when he is needed on the stage. He fails to call Naksh. Kartik applies sindoor to Naira’s hairline and completes their story of true love once again. Rishabh stays stuck and shouts to get some help.

Naira feels Sid has turned her dream true by coming for the performance. She tells him that everything looks like a dream to her. He tells her that he can never upset her, all that he does is for her happiness. He reveals that maybe this was their destiny that they performed together. Rishabh finally gets free and rushes to the family to tell them that he didn’t perform with Naira. He goes to see Naira, how she performed along. Weather changes and wind storm strikes the place. Rishabh fails to see Naira with Kartik. Everyone tries to secure themselves and leave from the temple safely.

Manish wants Naksh to protect Naira, while Kirti asks Naksh to stay with them. Manish assures Kirti that they all are with her. Kartik protects Naira and takes her along. Soon, a disaster strikes Kartik and Naira, when the stage collapses and falls over them. They both rush to save each other first and have a moment. Naira gains her memory for a while and shouts Kartik’s name aloud, which brings a ray of hope for Kartik again. He wishes that she retains their good memories. Rishabh wants to find Naira and family.

Rishabh finds Naira in trouble and runs to save her. He doesn’t want his friend to get hurt. He wonders who is with Naira. He gets to see a person with her and asks the people to help them by lifting the stage. Kartik doesn’t let the stage harm Naira and takes all the load on his shoulders. Naira faints down by a shock. He acts a shield of security towards her.

Rishabh witnesses Kartik and Naira’s true love when he finds Kartik protecting her. He realizes that Kartik has intentionally locked him in the green room to perform with Naira. Rishabh feels they are just inseparable. He learns Kartik deceiving everyone as Sid once again. He gets confused about Kartik’s intentions. Rishabh overhears Kartik and Naira’s conversation and realizes that Kartik is still part of Naira’s new world, with the new identity of Sid. Will Rishabh reveal Kartik’s truth to Naksh or let the lovers be in their joyful world? Keep reading.