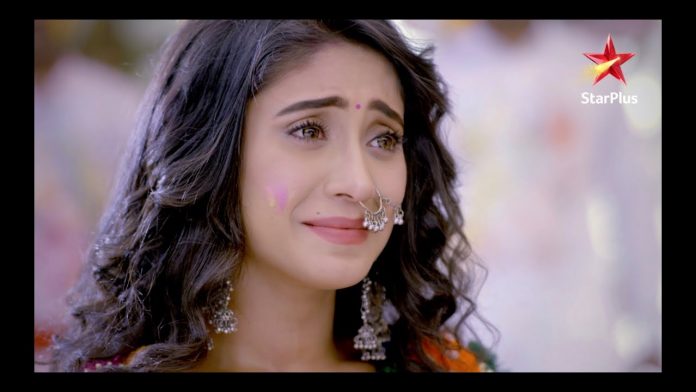 TGI Friday’s Spoilers YRKKH Holi Twist Naksh and Kartik get into a huge conflict during Holi festival. Naksh tells Kartik that he didn’t do anything than hurting Naira. Naira stops Naksh from insulting Kartik. She gets all her memories back. She was much in love with Sid. When she knows that Kartik is Sid, she gets happy. Naksh blames Kartik for lying to Naira once again by taking Sid’s identity. Naira tells Naksh that he can’t hurt Kartik this way, she will not tolerate her husband’s insult. She tells them that she has revived all her memories. She tells Kartik that she remembers everything. She hugs Kartik and forgives him.

This brings happiness in Singhania and Goenka family. Naksh is the only one who isn’t happy with Naira’s decision to return to Goenka house. He doesn’t feel Kartik will protect her from sorrow. Kartik doesn’t want Naksh’s involvement in Naira and his relation. He also limits Rishabh from creating troubles for him. Rishabh and Naksh fail to separate Kartik and Naira.

Ghatbandhan:
Raghu dances with a girl, leaving aside Dhanak. He grows Dhanak jealous by his amazing performance. Dhanak gets ready in a mesmerizing look to catch Raghu’s attention. She thanks Raghu for calling to the event, which gave her a chance to catch Maai and Maya’s crime. She wants to make the culprits pay for the crime. She gets the info from the goons. She wants to get on her duty and nab the goons. She stuns Maai by showing her shooting skills.

Sitara:
Vrinda wants to stop Sitara and Viraj’s marriage. Sitara gets decked up in her bridal attire. She is taken to the mandap. She meets her groom Viraj. Vrinda wants Surili to marry Viraj. She swaps Sitara with Surili in the mandap. She doesn’t let anyone see the bride’s face and asks them to continue the marriage rituals with ghunghat on. Viraj isn’t aware that he is getting married to Sitara. Surili dons the ghunghat when Viraj gets close to see her face. Vrinda has dangerous motives. She has planned everything to fail Sitara’s protective shield over the family. Sitara learns Vrinda’s plan and takes charge to reach the mandap in bride’s place again. Sitara will be marrying Viraj.

Ishq SubhanAllah:
Kabeer and Zara come close and have a sweet moment. Kabeer teases her. She tells him that he is the best husband of the world. He gets happy hearing her good words about him. He calls her a helpful angel in his life. They stay happy. Zeenat goes mentally unstable after Rizwan exposes her truth in front of the family. She is angered on Rizwan’s cheat.

Tujhse Hai Raabta:
Kalyani does a mistake and tears Malhar’s shirt. He gets angry on him. Kalyani gets clumsy. He asks her what does she want and why is she doing this. She wanted him to wear her favorite color shirt. They get ready for Moksh’s Rudra Abhishek.

Pyaar Ke Papad:
Omkar takes part in the wrestling competition on Triloki’s demand. Triloki makes him wrestling Pinky, who is a big wrestler. Omkar struggles to win the fight. Omkar gets bashed up by the professional wrestler. He fails to counter his tactics. Shivika encourages Omkar to fight. Omkar wins the game and gets applauded by one and all. Triloki gets impressed with him and hands over the trophy to Omkar. Its a happy moment for Shivika. He praises Omkar and forgives him for the past mistakes. He asks Omkar to ask for anything, since he is very happy. Omkar tells Triloki that he wants to marry Shivika. Triloki gets angry on him. He takes back the trophy from Omkar. He throws the trophy away and scolds him for not having any values. He takes Omkar’s class and insults him publicly. Omkar is determined to convince Triloki any way.

Aapke Aa Jane Se:
Vedika meets Badi Amma’s sister, who is Ghungroo’s mum. The clients don’t want to have any deal with Agarwals knowing about the ghost drama in the house. Ghungroo scares the clients. The clients ask for their money and run away. Vedika gets the lady home and reveals that there is no curse on them, the lady will reveal the truth to them. Vedika tells Sahil that this isn’t real Ghungroo. The lady hugs Ghungroo and confirms that he is her son. Badi Amma is not on good terms with her sister. She doubts on Ghungroo knowing that he is her nephew. She doesn’t want Ghungroo to stay with them, but Sahil allows Ghungroo and his mum to live with them. Badi Amma is afraid that her secret will come out. Ghungroo gets his mum on his side and wants to challenge Badi Amma further.