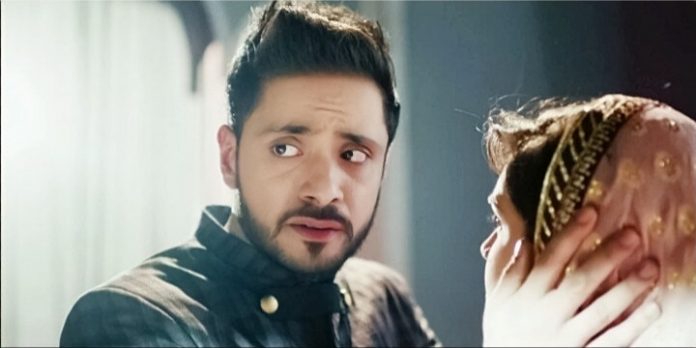 Ishq SubhanAllah Shakti Aapke Aa Jane. Kabeer falls in trouble. Some people protest against Kabeer and pelt stones at him. Kabeer gets injured. His head bleeds. He falls down. Kabeer and the members of Shariah board get tensed watching the protest. The people want Kabeer to resign from the chief post. The members think Khalid is behind this, since Khalid has made a video viral to malign Kabeer’s imagine. Kabeer reaches Zara’s house by difficulty. Kabeer’s dad gets worried seeing his state and scolds him for his carelessness. Zara and her family take care of Kabeer’s head wound and do the first aid. They get Kabeer into a stable state. Kabeer calls a press conference to bring the truth out. He doesn’t want Zeenat to get blamed. He wants to keep her name out of the matter.

Happy and Rocky get chased by Sania’s goons. Sania wants Happy killed. Rocky saves Happy from all the goons. He doesn’t want Happy to become Sania’s target. Rocky guesses that Bhatia is behind the attack. He reaches back to the city to confront Bhatia. He has no idea that Sania has sent the goons after Happy. Rocky gets positive like Happy and encourages her to be strong. He signs his life’s first deal because of Happy. Happy and Rocky get clear about their old perceptions and see a new better side of each other.

Shakti: Rajat Singh beats the goons who attack Sehgal. Sehgal comes to Harak Singh and tells him about Rajat Singh who saved him and tells that he can’t fight the case and risks his life. Soumya asks Harman not to lose hope as she gets strength from his hope and tells that surely someone will help them get justice. Harman and Soumya are trying to find Rajat. They want Rajat to find Soumya’s case. Harman sees Rajat street fighting. Harman fights with him to convince him for taking the case. Harman tries hard to talk to him and explain the critical case of Soumya’s claim for motherhood. Rajat doesn’t listen to Harman.

Harman fights with Rajat in the ring, so that he can complete his talk and convince Rajat. He knows Rajat can’t avoid him inside the ring. Rajat tells him that he has left law and now he is not taking up any legal case. Harman asks him to take up Soumya’s case at least for uniting a mother and son. His emotional speech influences Rajat. Rajat Singh decides to fight Soumya’s case and get justice for her. He is a lawyer by profession, but had left practice many years back, and returns to court for Soumya’s justice.

Roop: Roop doesn’t want to lose Shamsher and fears for his life after the latter tried to commit suicide. He agrees to become a police officer for his happiness. Ishika confronts Shamsher and tells that he is forcing his decision on Roop and snatching his real happiness from him. Roop comes there and shouts at Ishika. He says nobody can talk to my Papa like that and asks her to apologize to Shamsher. Kamla, Ishika and others get shocked. Shamsher is upset with Ishika. Roop tells that he doesn’t want to see his father upset. They see his concern for Shamsher.

Aapke Aa Jane Se:
Badi Amma is hiding a big secret. She doesn’t want to fall in everyone’s sight. Ghungroo tells his mum that Vedika is trying to expose him. His mum asks him to have patience, she has come with same motive to ruin Agarwals. Badi Amma meets them and begs them to keep the secret safe. She asks them to leave from the house. Ghungroo’s mum is revengeful. She recalls the old incident where Badi Amma has killed her husband. She angrily breaks the family picture of Agarwal family. Vedika overhears Ghungroo and his mum’s conversation. She wants to know the secret of Badi Amma’s crime.

Ghatbandhan:
Raghu and Dhanak celebrate Holi with their families. Raghu applies colors to Dhanak. She gets drunk and dances with Raghu. He controls her mischief. She shows her fun personality after drinking Bhaang.