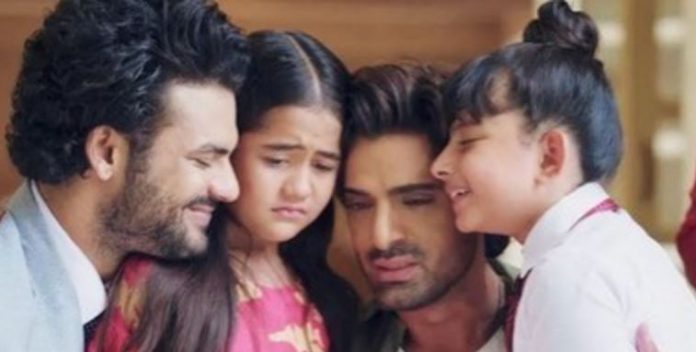 Upcoming Kulfi Kumar Bajewala Kasautii Zindagii Kay: Prerna gets happy and enjoys the sufferings of Komolika and Anurag. Anupam gets to witness Prerna’s planning. He also gets glad to see the clever woman Komolika’s misery. He wants Prerna to give an answer to Komolika. Anupam tells Anurag that he has seen the live video on Prerna’s phone. Anurag gets to see the driver on video call. He realizes that driver is working for Prerna. Anupam asks Anurag to let Prerna teach a lesson to Komolika. Anurag is happy that Prerna has become smart and bold. He tells Anupam that he is also suffering by Prerna’s move. Komolika gets the driver’s phone and yells at Prerna for ruining her honeymoon.

Prerna tells her that it was all her plan. Komolika is sure that Prerna won’t win. Their challenge goes on. Prerna tells her that Anurag is her husband. Anupam wishes that Prerna and Anurag trouble Komolika more. Anurag pretends to scold Prerna to satisfy Komolika’s wish. Meanwhile, Ronit gets mad for Shivani. She doesn’t want to talk to him. Ronit chases her to convince her for having a relationship again.

Anurag is happy seeing Komolika’s state. He calms her down when she scares him of dire consequences striking Prerna. Prerna is upset that she isn’t able to tell Anurag about her pregnancy. She decides to keep it a secret. Anurag turns witty and handles Komolika well. Komolika gets worried when the driver flees. She wants to reach the hotel at any cost. Komolika and Anurag get helpless to stay at a cheap hotel. She is ready to do anything to defeat Prerna. Anupam steals some time from Nivedita’s tight schedule to express his love. Nivedita doesn’t love him and asks him to stay happy with the money. Komolika informs Prerna about her honeymoon trip getting back on track. She gives enough worries to Prerna.

Krishna Chali London: Krishna tells Veer that she has taken up a new path, she is doing a new business of wedding planning. She tells him that she has taken her path to get distant from her, she has left the medical field. She asks Veer to leave from her place. Veer asks her if she doesn’t care if he marries Shivani. When she denies her feelings, he keeps a condition and asks her to prove that she doesn’t care. He tells her that she will have to plan his wedding, since he will be marrying Shivani. He tells her that if she completes the task, he will never bother her again.

Krishna agrees to Veer’s condition to get rid of her. Veer tells Krishna that her heart also knows the truth, that she loves him and can’t see him marrying someone else. She agrees to plan his wedding and take up the task. Veer comes home and gives a big surprise to Shivani. He tells her that he is ready to marry her. He tells her that he has made up his mind and its his final decision. Sunaina and Shivani get overjoyed with his decision. Shivani promises to never abandon him again. Krishna is worried for Veer. He apologizes for bothering her. He asks her to meet him at his house for the new work. He reminds her the work duties. Krishna asks her family to let her handle Veer, who is much crazy. She wants to plan Veer’s marriage so that he never ever bothers her.

Sunaina wants to know why is Veer taking such decision suddenly. She feels Krishna is the reason behind his decision. Shivani doesn’t care for Krishna. She is happy that Veer is marrying her. Veer gets into his act so that he makes Krishna realize her love. Veer asks Krishna to make the wedding a superb event. He doesn’t want anything usual. Sunaina doesn’t want Krishna to become a hurdle in Veer’s marriage. She makes it clear to Krishna that she shouldn’t bring instability in Veer’s life. Krishna tells Sunaina that she doesn’t want Veer’s life to get spoiled, so she has agreed to his condition. She assures Sunaina that Veer will forget his silly wishes soon. Veer starts charming Krishna to convince her for marriage.

Kulfi Kumar Bajewala:
Sikandar gets bound by the promise given to Amyra. He doesn’t want his daughter to suffer in her final days. He can’t believe that he is going to lose Amyra because of Lovely’s mistake. Lovely has committed a big sin and is aware of the outcome. She deeply regrets for Amyra state. She wishes Amyra gets fine. She tells Sikandar that she is ready to unite him with Kulfi and also accept Kulfi home if he gets her home. She is ready to compromise on her hatred for Kulfi. She tells him that she is left with no options, neither love nor hatred, after seeing the way Amyra is suffering because of her.

She didn’t expect Amyra to die, because of the drugs. Amyra tells Lovely that even she has promised to keep Kulfi away from Sikandar. She doesn’t want Kulfi to come back home and clears this to both her parents. She tells Lovely and Sikandar that she wants their love until she lives. Sikandar tries to give happiness to Amyra and throws a grand birthday party as per her small wish. Amyra wants to live her complete life during the last days. Will Lovely repent for her mistakes and unite Sikandar and Kulfi? Keep reading.