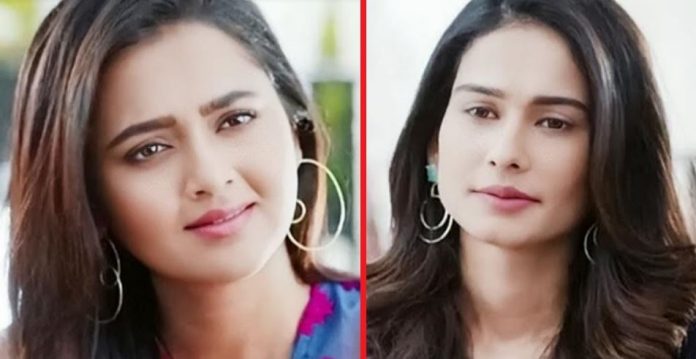 Silsila Fate turns cruel. Mishti and Ruhaan can’t stand each other. She imposes her rules on Ruhaan. Pari enjoys the moment seeing Mishti bossing around and scolding Ruhaan. Mishti doesn’t want any changes in her house. Ruhaan tells her that he can’t follow her rules. Mishti tells him that she won’t tolerate his attitude. She doesn’t want Pari to befriend Ruhaan. She asks Ruhaan to stay in his limits and not interfere in her family matters. Ruhaan also reminds her the rules made by him. On the other hand, Veer tells Mishti that he wants to meet her. Mishti wants Pari to accompany her for card selection. Pari asks her to go with Veer. She tells Mishti how much valuable she is. She can never see Mishti sad, since she loves Mishti a lot.

She asks Mishti not to worry, she won’t talk to Ruhaan by going against her will. The sisters get emotional. Ruhaan meets Arnav. Pari promises Mishti that she won’t talk to Ruhaan, but he wishes her for her project. Arnav also has a problem with Ruhaan. This angers Pari and drives her crazy. Veer asks Ruhaan to come over and also get Mishti. Mishti doesn’t want to go with Ruhaan. Veer tells her that she can come with Ruhaan. She resists at first, but is left with no option. Ruhaan and Mishti leave for their first trip together. Mishti can’t stop herself from taking his class on the way. She likes to shout on him.

He plays a love song, which rages her. They both end up into a moment. Fate brings them closer, when they both want to get distant. Ruhaan gets influenced by her presence. He can’t get over her charm. He knows Veer is her fiance, even then he doesn’t understand what’s happening that he is getting attracted to her. Ruhaan wants to stop his feelings, since he doesn’t want to ruin Veer and Mishti’s relationship. Pari and Arnav meet the client and clear that she has given a wrong estimate before. The client doesn’t want the change in budget. Pari apologizes for the mistake. Arnav gets impressed with Pari’s perfection oriented move. He asks Pari did she get this briefing from Mishti.

Pari tells him that Ruhaan is the one who motivated her a lot. She admits to Arnav that she is following her heart, just on Ruhaan’s advice. She clears out that she likes Ruhaan, she has a right to choose her friend, it isn’t wrong if she likes Ruhaan. Pari realizes this as well. She wonders why she likes Ruhaan. Arnav gets upset with her confession. Mishti and Ruhaan get into an awkward moment. Veer meets them and finds them behaving weird. He wants to know what happened that they look alienated. Veer teasingly questions Ruhaan about his lover. Ruhaan gets speechless. Ruhaan gets close to Pari as a friend, while Mishti seems to get affected for the first time. Fate plays a game by bringing Mishti and Pari into a similar situation like their mothers.